For other classes in Online, see Classes (Online).

"These traveling knights call upon the powers of light and the burning sun to deal massive damage to their enemies while restoring health, magicka, and stamina to their allies."
―In-game description[src]

The Templar is one of the six playable classes in The Elder Scrolls Online. 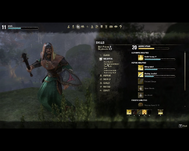 A Templar and skills
Add a photo to this gallery

Retrieved from "https://elderscrolls.fandom.com/wiki/Templar?oldid=2916342"
*Disclosure: Some of the links above are affiliate links, meaning, at no additional cost to you, Fandom will earn a commission if you click through and make a purchase. Community content is available under CC-BY-SA unless otherwise noted.