The Blessings of Nature
Hired Muscle

For other uses, see Temple of Kynareth.

The Temple of Kynareth is a temple to Kynareth that is located in Whiterun.

Accessible from Whiterun's Wind District, the temple is typically used as a place of worship and healing. Danica Pure-Spring and her apprentice, Acolyte Jenssen, tend to the sick citizens of Whiterun Hold, such as the Wounded Soldier and the Sickly Farmer.

The temple sits across the circle from Jorrvaskr, and overlooks the sickly Gildergreen tree. The Dragonborn learns from Danica, either by finding her in the temple or encountering her in the circle outside, that the mythical tree is in danger of dying, and thus receives the quest "The Blessings of Nature." 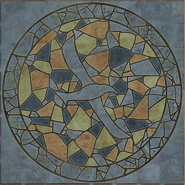 The mosaic in the centre of the temple.
Add a photo to this gallery

Retrieved from "https://elderscrolls.fandom.com/wiki/Temple_of_Kynareth_(Skyrim)?oldid=2947208"
*Disclosure: Some of the links above are affiliate links, meaning, at no additional cost to you, Fandom will earn a commission if you click through and make a purchase. Community content is available under CC-BY-SA unless otherwise noted.