Temple of the Ancestor Moths

For other uses, see Temple of the Ancestor Moths.

The Temple of the Ancestor Moths is located at the far eastern end of the Jerall Mountains range and northeast of the Shrine of Azura; it sits in a valley cleft. It is a favored location for Ancestor Moths, which are abundant there.

The only significant plants here are a few clouded funnel cap by the stairs leading to the temple grounds.

The area is tended to by Brother Hridi and Brother Hjar who work outside until 6PM and then head to the Monk's Quarters. Brother Holger spends time in the chapel or the crypt and returns to the Monk Quarters after 7PM.

It is recommended to leave the whole area alone until the relevant quest as entering certain doors will trigger quest updates which can mix up the Thieves Guild questline.

The Gray Fox has discovered that the priest have secretly hidden Savilla's Stone away inside their catacombs. He sends a thief to go and recover the artifact. Brother Hjar is dedicated to his job and refuses to give away any information regarding the stone or how to get inside the temple.

The Hero standing on the roof

The Temple of the Moth Halls 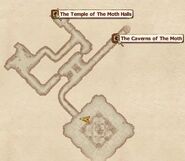 Catacombs of The Temple of The Moth

The Caverns of the Moth 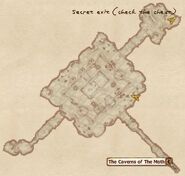 Shrine of the Moth
Add a photo to this gallery

Retrieved from "https://elderscrolls.fandom.com/wiki/Temple_of_the_Ancestor_Moths_(Oblivion)?oldid=2953424"
*Disclosure: Some of the links above are affiliate links, meaning, at no additional cost to you, Fandom will earn a commission if you click through and make a purchase. Community content is available under CC-BY-SA unless otherwise noted.