Temple of the Mourning Springs

"Have you heard about the Temple of the Mourning Springs? Ancient, it is, but not visited by the people of the Roost. Avoid it, they do, with superstitious dread"."
―Priestess Ensa-ko[src]

Temple of Mourning Springs is a temple found on the eastern side of Khenarthi's Roost, southeast of Hazak's Hollow. It is currently infested by enemy skeletons, and is one of the locations that Razum-dar wants the Vestige to investigate after arriving on the island.[1]

The Temple of the Mourning Springs was created to house the Mourning Stone, which powers the fountain in the courtyard with its unending reserves.[2][3] Unbeknownst to all, however, is that the temple also serves as a prison for the Maormer wizard, Uldor, and that the Mourning Stone serves to keep him trapped.[4]

Just prior to the Vestige's arrival on Khenarthi's Roost, Ealcil, an Aldmeri Dominion scholar, Rurelion, a Dominion mage, and Gathwen, Rurelion's apprentice, embarked on an expedition into the Temple of the Mourning Springs. After removing the Mourning stone, the group was attacked by undead,[2][5][6] who, unbeknownst to them, were controlled by Uldor.[4] As the undead captured Rurelion, Ealcil successfully retreated with the Mourning Stone to Eagle's Strand,[2][7][8] while Gathwen remained outside the temple, looking for someone to help get her master back.[5][9]

The Temple of the Mourning Springs possesses both an elaborate exterior and a multi-roomed interior. Both are patrolled by enemies prior to completing "Tears of the Two Moons."

On the path toward the front gate, a campsite can be found, set up by the expedition group.[8][10] There will be several leveled weapons next to the tent on a rack. On the table in the tent closest to the temple is another weapon, as well as some supplies, food, and a Rat. Behind the table is a Thieves Trove; on the ground inside this tent as well is Wind-Ripped Page. Near one of the smaller tents is Bolga's Guide to Island Beasts and more supplies. An Alit will be in the area from time to time, so anyone staying in the area will have to kill it or flee.

A similar camp with several dead Crosstree Bandits lies near the southernmost entrance. In addition to several more rats and a leveled weapon or two, Khenarthi's Roost: Interim Orders can be found on the table.

To get to the back of the temple, follow the path toward the north, which goes near another bandit camp; it will be occupied by Crosstree Bandits. Behind the temple on an altar is a simply locked chest, which must be lock-picked, although dispatching the numerous Harpies in the area will have to be done first. Down away from the ruins near the mountainside is another simply chest.

The outside courtyard, which is located between the walls, can be entered in any of three locations. Skeletal Archers, Skeletal Warriors, and Skeletal Cryomancers will patrol this area in great numbers. At the top of two opposing sets of stairs are where the two wards seal the temple entrance in "Tears of the Two Moons," which are marked by either a spider or a scorpion sigil; each will have a Revenant nearby. Once the wards are down, there are multiple ways to enter the temple catacombs; each room will have a nightstand, which can be looted to find a recipe or book. After Uldor has been defeated, the courtyard will be filled with friendly ghosts.[9] Although some can be interacted with, none give any additional rewards or services.

The catacombs are the only place in the temple where enemies do not spawn. The room is quite large, and is filled with the remains of numerous non-Khajiit, which appear to have been placed with care.[11][12] Rurelion's Observation No. 1 can be found in this room, near the stairway, on the side closest to the combination puzzle. Near one of the entombed bodies as well is Mourning Springs Burial Rites.

The puzzle can be solved by following the phases of the two moons.[5] First, activate the farthest one to the left, which shows two new moons with the larger one, Masser, on top. Next, hit the second farthest to the right, which shows the same setup but with two crescents; then, the farthest right, which is two full moons; and finally, the second farthest to the left, which is two crescents, but with the smaller moon—Secunda—on top. Entering this code will lower the barrier to the ritual room.[9]

The ritual room is where the Mourning Stone was originally located prior to its removal.[3] The center of the room is paved, but the outer edges are filled with water, presumably from the Mourning Stone; four bone piles sit in them as well. Frogs will hop in the water, and can be looted for Guts. Rurelion's Observation No. 2 and Ealcil's Journal can be found in the room, near the entrance on top of some crates.

Once Uldor reveals himself to be controlling Rurelion's body,[4] he will summon more skeletons to attack anyone else inside. These enemies are only temporary, for once Gathwen dispels the bone piles, they will stop appearing.[9]

Still more water from the Mourning Stone appears in the Great hall, which is filled with hazards: Giant Bats patrol the area, and spike traps protrude from the ground. One must "step lightly" in order to get through the entire room,[13] which can be done by either going to the left or to the right.

Both corners near the stairs to the ritual room have some loot-able urns, although the area to the right also has an extra Giant Bat to deal with; also near the entryway stairs is Rurelion's Observation No. 3. Both sides have a side room, with nightstands in each; they can provide respite from the enemies and traps if needed. To the right of the stairwell to Uldor's tomb lies the Lost and Dusty Journal.

The opening to Uldor's tomb is simply a square hallway, which goes around a center wall. Uldor will be waiting for whoever the Vestige chose to sacrifice, and so looting the area near the door may not be as easy until after his defeat, for Uldor will blast the area with shock spells.[9] In the larger of the two areas, four pedestals sit in each corner, and the Moarmer's body can be found in the center of the room, surrounded by candles and a rut filled with water.

The entirety of the quest takes place in or around the Temple of the Mourning Springs. Gathwen will lead the Vestige to the temple; the pair is halted by Uldor, but only briefly, making their way through the courtyard. The wards guard the entrance, and are taken down by the two before progressing through. Uldor will attempt to attack with more of his undead minions, but is fought off by Rurelion. Once the Vestige finds him, he or she must decide whether to lock him with the Moarmer wizard or to use Gathwen instead. The Mourning Stone is retrieved by whoever was not chosen, and put back where it belongs, turning on the fountain again, and freeing the souls under Uldor's control.

The center of the Great Hall 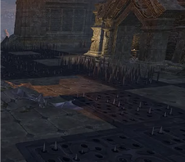 Spike traps in the Great Hall

Uldor's Tomb after the Mourning Stone has been returned

Retrieved from "https://elderscrolls.fandom.com/wiki/Temple_of_the_Mourning_Springs?oldid=3083186"
*Disclosure: Some of the links above are affiliate links, meaning, at no additional cost to you, Fandom will earn a commission if you click through and make a purchase. Community content is available under CC-BY-SA unless otherwise noted.