Bliss
Sheogorath's Court
Forces of Order, if the Hero becomes Duke/Duchess of Dementia

Duke of Mania
Master of Merriment
Priest of Order

For other uses, see Thadon, Duke of Mania.

"Thadon may be in a constant state of euphoria, but I wouldn't underestimate his intelligence. Oh, this is so much fun!"
―Sheogorath[src]

Thadon is a Bosmer noble, Duke of Mania, and lives in House of Mania's wing of Sheogorath's Palace.

Thadon is recognized to be a "Master of Merriment," and to be fond of over-indulgence by his use of mind-altering substances. He spends much of his time painting in the Halcyon Conservatory. He is addicted to Felldew, found in certain Elytra.

If the Hero chooses to become Duke or Duchess of Dementia, he will appear to them and Sheogorath, and announce a threat to the Prince of Madness. He then leaves to join the forces of Jyggalag to aid him in the Greymarch. It is implied in the quests "Addiction," "The Lady of Paranoia," "Ritual of Mania," and "Ritual of Dementia" that Thadon and Syl are in a relationship.

During this quest, Sheogorath asks the Hero to become a member of the court of his two dukes, Lord Thadon and Lady Syl, in order to gain a better understanding of his realm. Speaking to Lord Thadon will start the Addiction quest, which in turn must be completed in order to finish Understanding Madness.

Lord Thadon asks the Hero to retrieve the Chalice of Reversal, a recipient that is able to remove all ill effects that come from Felldew consuming. Giving the Chalice to Thadon will name the Hero a Courtier of House Mania.

The Hero of Kvatch must become the new Duke of Mania by poisoning Lord Thadon with three doses of Greenmote, then using Thadon's blood on the shrine at the Sacellum Arden-Sul.

The Hero must remove the influence of Order in Sheogorath's Palace by cleansing the pools of Mania and Dementia beneath the Fountain of Madness. This can be done by killing the Priests of Order, taking the shards in their bodies, and using said shards to shut down the obelisks found on the pools. If the Hero became the Duke of Dementia during Ritual of Dementia, Lord Thadon will be found here, having joined the forces of Order. As such, his death is required.

You haven't waited long at all. "Haven't I? Hmm, perhaps not. It felt like rather a long time, but then long times get longer when you're standing around thinking about them. A curious thing, that. Long roads get longer too, if you're thinking about them, but what about long words? They don't change nearly as much. Long, short -- it all ends up the same. Dust and tears. Usually tears first, then the dust. Dust can't cry, you see. That would be... well, amusing. You know what's NOT amusing? I don't have my Chalice of Reversal. It makes me sad. When I get sad, I don't care to do much of anything. I certainly don't care to help people who show up on my doorstep wanting something. Are we getting the picture here?"
You've been waiting a long time. "Oh, I wouldn't say that. How long is an eon, when you're ten thousand feet tall? Or if you're purple? It's all relative, you see. You wouldn't really know how long it's beenm since you weren't here. If you'd been here, it would've been no time at all, so who's to say? Don't answer that. I know the answer. I knew far more answers once. But they seem to have dried up. Or perhaps they drowned. I don't know anymore. You see? You see what I have to deal with? I can't recall if I'm coming or you're going without the Chalice of Reversal. Oh, now you've upset me."
You've been waiting forever. "Yes, yes... That just might be true. Or I've not been waiting at all. Forever and nothing are almost the same thing, wouldn't you say? How do you tell one from another if you're smack in the middle? Don't answer that. I already know the answer of course. It came to me during a meal. Not a very good meal, though. Too much pie. Pie is a tricky thing, wouldn't you say? Don't answer that either. Now that forever is over and you're here, you need to go away. Yes, away. There are places you should be, far away from here. The Chalice of Reversal is waiting for you. When I say you, I mean me, but it's no difference to the Chalice. One ends up being the other."
You... don't care? "Don't I? I thought I did. But then I also thought that you would be heavier. Look at you, you're light as a chair. How DO you walk around like that? It's all the same to me, either way. All of it. Nothing is right without the Chalice. Have you ever used it? No, of course not. You simply must! You just have to try it. It'll change your world, expand your horizons. Contracting leads to expanding, you know. Well, most of the time."

Rumors "Gatekeeper's gone. For good. Or not. Might just be on holiday. We'll see."
Chalice of Reversal "Oh, so you've heard of it?"

No, I haven't. "You haven't heard of it, yet you know its name? What a strange creature you are. One of my favorite toys. Does wonders for creativity. Well, not by itself, but it helps. Those Elytra, clever little bugs that they are. Is this making sense? Look, you eat the Felldew, then use the Chalice, and find the world a much brighter and happier place. Honest. But I don't have it. So I can't eat Felldew, because that would just be bad. I mean, really bad. Damn here!"
Yes, I have. "Then you know why I want it back! Can you imagine trying to eat Felldew without it? Disastrous! Curse that woman!"

Who? "We hold on to fleeting things even as we slip. I knew, and yet I indulged myself anyway. I indulged her a fair bit, too. Hee hee! It was passion, it was... forbidden. Oh, the things that would be said if word got out. That made it all the more delicious. From Dementia's own court, no less. Scandalous! Fatal, perhaps. But passion makes no accomodation for self-preservation."

Do I know her? "Don't you? If you don't, you might. You wouldn't fall for her, though. Not the type."
You mean Syl? "Well, aren't you the clever one. Mind you don't get too full of yourself. You might explode."
What happened? "Opposites repel, strangely enough. All that pleasure and pain locked away now, as if it never happened. Unfortunately, the Chalice is locked away as well. I have no wish to retrieve it myself, but fetching it might do you some good. My head is positively throbbing now... can you see it? I need to lie down. Find someone to tell you the rest of the story. Get the Chalice."

"Goodbye. So long. See you soon. Or not. Whichever it might be."

Chalice of Reversal "I feel as though we've talked about this. Am I mistaken? Perhaps you're mistaken, and we have spoken of it. I simply can't recall. I could think so much more clearly if I had the Chalice."
Rumors "My, my, my. Seems we're all anxious to know something, even if we already know it. Or, Syl knows it. Or not."

After retrieving the Chalice:

"The triumphant champion returns! So, do you feel any different? Now that you've been through this experience, I mean. You know what it's like now... Always wanting that next fix, hating it but craving it at the same time, and hating yourself for all of it. Ah, well. All over now. The Chalice helps, doesn't it? Indeed it does, and I could use some helping right now. I'll just take that back from you. And as a token of my gratitude, I grant you the role of Courtier of Mania, with all of its entitlements. Which is to say, none."

Chalice of Reversal "Wonderful to have it back. Really, truly. I can't thank you enough. Oh, wait, I already did."

"Ah, you again! A pleasure, I'm sure. No time for chatter now; I have a few important things to attend to, or did I? Ah well..."

"Oh my yes, I feel especially delighted this evening! Perhaps it's time I recited my latest soliloquy. Ahem. The lady fair, our love is told. With hair as fine as soft-spun gold. Lips as red as a sun-drenched dawn, skin as soft as a newborn fawn. Eyes as blue as a cerulean sea...uhh...what... ...my heart...can't breathe...help me..."

Thadon: "Wait! I must speak! Halt! Cease! Desist!"
Sheogorath: "Thadon, how dare you interrupt me! Only I interrupt me. Like just then."
Thadon: "Syl... my... Syl is dead? This can't be right. Is this right? What have you done? Have you done this?"
Sheogorath: "I'm speaking with someone. We'll talk later. Or not. When is later, exactly? Not now, I'm sure of that. Guards, I think Thadon forgot how to use the door. Kindly show him out. Before I forget myself."
Thadon: "But, this... stranger? Someone new? From somewhere else? Not here. I'm sure of that. I don't understand. Or I can't."
Sheogorath: "Hold your tongue, little Duke, or I'll tear it from your mouth."
Thadon: "Ridiculous! You can't do this! Although... you're omnipotent. Or just tall. It's one of the two, I'm sure. And a fool!"
Sheogorath: "Calm yourself, Thadon. You're making my teeth itch. You still hold your office. I suggest you see to your duties."
Thadon: "Order approaches! It's taken the Fringe already! With Order clothes and Order hats! And you speak of "change"?"
Sheogorath: "Change will preserve us! It is the lifeblood of the Isles. It will move mountains! It will mount movements!"
Thadon: "No. No. Certainly not. This isn't good. I'm sure it's bad. I can't do this anymore. No more."
Sheogorath: "Then go, Thadon. Have your Greenmote. Take a bath. But leave. Before I decorate my throne with your insides."
Thadon: "Yes. That's it. I'll go. Away. Far away. Working for them is like working for us, but without all the dying."
Sheogorath: "No! let him go!"
Thadon: "Enough! I go to Jyggalag. I give myself to him, as a Priest of Order! This isn't done, Madgod. I think it's just started." 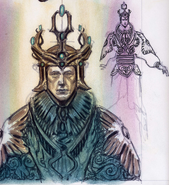 Thadon concept art
Add a photo to this gallery