Those under the sign of The Apprentice recover Magicka faster, but are more susceptible to Magicka damage.

For other uses, see The Apprentice Stone.

The Apprentice Stone is a standing stone in The Elder Scrolls V: Skyrim.

The Apprentice Stone regenerates magicka at a 100% increased rate, at the cost of taking twice as much magic damage.

Combined with the use of wards from the Restoration school of magic, this extra damage from magicka can be avoided, albeit temporarily.

The Stone is located northwest of Morthal, north of Fort Snowhawk, and south of Solitude, in the southwestern part of the marshland. 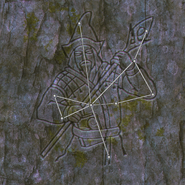 Image on the stone

Čeština Deutsch Español Français Polski Русский
*Disclosure: Some of the links above are affiliate links, meaning, at no additional cost to you, Fandom will earn a commission if you click through and make a purchase. Community content is available under CC-BY-SA unless otherwise noted.
Advertisement