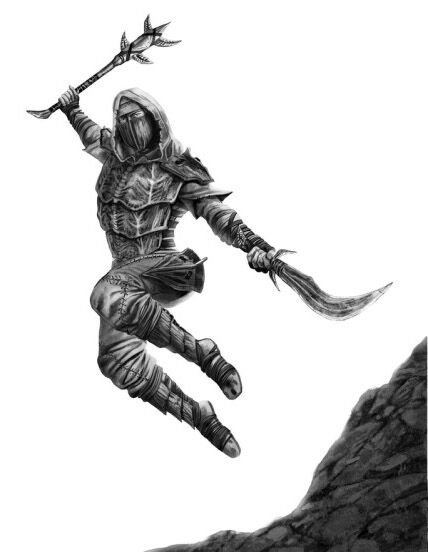 "May your kills be quick and many!" So say the Ashlanders, a tribe of Dunmer harking back to the old ways of the Nerevarine cult and the prophet Veloth. While there was an uneasy truce between our Ashlander emissary and Bekleri Llenim, the Dunmeri champion, a separate dwelling, a slice of scuttle, and a tipple of golden wine helped temporarily mend the divide. While Azura's curse allows the Dunmer to take on a grim countenance, the Ashlander warrior adds ritual paint and markings to further emphasize his grayish-blue skin tones and piercing red eyes.

Heavier armor is almost never worn (it seems only crafted to be presented to a high-ranking village chief or elder). Instead, guar leather and chitin plates adorn the more primitive Dunmer, shells carefully heated and cooled until malleable, then pressed and twisted to form breastplate, fauld lames, and even elements of the asset, along with the shoulder plates. Ebony is usually shunned; the Ashlander crafts folk prefer sealed resin, strapped leather wrapping, and rudimentary mace spikes or serrated sword edges. Those wishing the twisted blade of a dagger under their ribs might compare this to the arms of a Reachman. But I would never stoop so low.

Retrieved from "https://elderscrolls.fandom.com/wiki/The_Ashlander_Emissary:_Tanethen_Rotheloth?oldid=2762849"
*Disclosure: Some of the links above are affiliate links, meaning, at no additional cost to you, Fandom will earn a commission if you click through and make a purchase. Community content is available under CC-BY-SA unless otherwise noted.