Anchors from the Harbor

The Dangerous Past is a quest available in The Elder Scrolls Online. A courier will approach and sends word that the fighter's guildmaster wishes meet the Vestige as soon as possible.

Sees-All-Colors has had Doshia's Journal translated. From it she believes she may have discovered information relating to the mysterious Mortuum Vivicus.

The Fighters Guild quests are the same for all factions. However, the closest city will change based on the faction.

When meeting the guildmaster the Vestige will find out that Doshia's Journal has been translated. It turned out Doshia was looking for something hidden in the Dwemer ruin Mzeneldt, connected to Mortuum Vivicus. She then asks them if they want to venture with her walking through the portal she has prepared, to carry them across Tamriel.

After following the guildmaster through the portal, either talking to her to get more detailed information about the mission or start exploring Mzeneldt. The path takes them into a larger room with Dwarven Spiders and Dwemer Spheres. Defeat them and proceed through the door to the next room where a ghostly scene is starting to show with the ancient ones who were there to hide the crystal, one of them is lying on the floor dying. When the scene has faded out there is a discarded journal left on the ground.

One by one of the ancient ones suffers and dies, shown in more ghostly scenes, and journals are left behind. Lanath's Journal and Valasha's Journal. After reading them, find Sees-All-Colors and update her with the journals. There where two cities, one worshipped Meridia, the other Molag Bal. Abagarlas, the city of dead, creates a relic to strike at the Meridians, Delodiil, city of light, creates their own weapon, forged around a heart of crystal.

The journals describes the ancient ones stole into the heart of the enemy with this crystal weapon, stopped the ritual and their king ends the dark rule of Abagarlas. They felt hunted and hid the crystal heart and a tome with instructions on how to make the weapon, spoken about in the journal, here in Mzeneldt. The priestess of Meridia gave her life and relit the crystal so the weapon could one day be forged.

Continue searching the ruin and in the next room another scene appears with the last two of the explorers fighting Dwemer spiders and a Dwemer sphere. There is only one survivor and on the ground Endarre's Log will appear after the scene fades away. Reading the log will give the Vestige the hint in how to open the large doors. Collecting five Dwarven crystals, held by the nearby guardian constructs and place them in the special sockets near the doors. When all crystals are placed in the sockets, a light will go from each up to the doors and this will open them.

When inside a final ghostly scene is appearing with the ancient one fighting a Dwarven Centurion. The scene fades and leaves a last journal on the ground. After reading it, the crystal heart, the prismatic core, and the tome can be found in the chest nearby. After retrieving the artifacts a Dwarven Centurion activates and the Vestige must defeat it before returning to the guildmaster. She instructs them to give the items to Merric, creates a portal back and tells them she has urgent business to take care of.

Before the Vestige can walk through the portal, Jofnir Iceblade appears and he has something important to tell. He tells the Vestige they are in danger, he can't fully comprehend them, even in death. He implies someone near them will betray them and warns them to be careful before fading away.

After walking through the portal back to the Fighters Guildhall, Merric is waiting for the artifacts. Hand them over and he will start with his research on them at once. He also hands a reward over to the Vestige with an excuse from the guildmaster, she had urgent matters to attend to and regrets she couldn't stay. 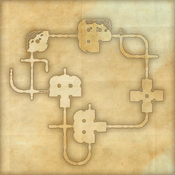 Crystals placed in the sockets

A room in Mzeneldt
Add a photo to this gallery

Retrieved from "https://elderscrolls.fandom.com/wiki/The_Dangerous_Past?oldid=2901058"
*Disclosure: Some of the links above are affiliate links, meaning, at no additional cost to you, Fandom will earn a commission if you click through and make a purchase. Community content is available under CC-BY-SA unless otherwise noted.