The Elder Scrolls: Arena is a single-player role-playing video game developed by Bethesda Softworks in March 25, 1994. Arena is the first installment The Elder Scrolls action/adventure RPG fantasy video game series, taking place during the ten years of the Imperial Simulacrum of the Third Era.

Arena was one of the largest games created at the time of its release, if not the largest. In 2004, a downloadable version of the game was made available free of charge as part of the 10th anniversary of The Elder Scrolls series, but newer computers past Windows XP require an emulator, such as DOSBox, to run Arena, as it's an MS-DOS-based program.

Arena takes place on the continent of Tamriel, complete with wilderness, dungeons, cities and villages in a 6 million square mile play-space for the player, simulating the experience of a full continent.

Although not as popular as the later games, Arena generated a cult following and was successful enough to spawn a popular sequel, Daggerfall.

Arena was originally supposed to be a game of gladiatorial combat, hence its name. The player was to take their team of gladiators, and would travel about a fantasy world fighting other teams in their arenas until the player became "grand champion" in the world's capital.

Along the way, side-quests and various role-playing aspects were added. Eventually, these side-quests became more important than the tournament aspects, so the tournament part of the game was discarded, and Arena became a "full-blown RPG."

It sold slowly, but steadily, and despite harsh reviews, general bugginess, and the considerable demands the game made on players' machines, the game became a cult hit.

Because all the material had already been printed up with the title "Arena," the game went to market as The Elder Scrolls: Arena. The name turned into being a nickname for the world of Tamriel, since the Empire of Tamriel was so violent.

Missing their Christmas 1993 deadline, the game was released in the "doldrums" of March 1994, which was considered a bad time to release a game for a small developer like Bethesda. The misleading packaging further contributed to distributor distaste for the game, leading to an initial distribution of only 3,000 units.

When the game launched it was initially very buggy, being very difficult if not impossible to complete the main quest in the original, non-patched version of the game. Bethesda released a number of patches to fix almost all of the glitches, making the game finish-able and more stable.

Arena was originally released on CD-ROM and 3.5" floppy disk. The CD-ROM edition is the more advanced, featuring voice acting for various important characters, and an enhanced CGI-video ending.

In late 1994, Arena was re-released in a special "Deluxe Edition" package, containing the CD-ROM patched to the latest version, a mouse pad with the map of Tamriel printed on it, and the "Codex Scientia"; an in-depth hint book.

The 3.5" floppy disk edition was released as freeware by Bethesda Softworks in 2004, on the official Elder Scrolls website for Arena.

Arena had gotten a re-release on September 10th, 2013 in a collection with the other four games in the main series. It is the exact version as the original, yet unlike the downloadable free version, bypasses the DOS menu entirely.

The actual game-world is substantially larger than Morrowind, Oblivion, and Skyrim together. The game utilizes randomly generated content to generate a massive world, without much effort on the developers' part. A consequence of the random generation is that outside of the 17 designed dungeons, areas are reset on exit. Therefore, it is not possible to 'clear' these dungeons as they will infinitely respawn enemies. It also means that unlike games from Morrowind onward, any loot dropped inside the location will vanish on exit, making carrying capacity even more important than in later games.

The world has hundreds of towns made with actual design, rather than being random, containing businesses with random names (examples being "Gold Sword", "Silver Gauntlet", etc.) As well as several hundred dungeons, along with 17 specially designed dungeons that are part of the game's main quest.

Due to the enormity of the world, fast travel is essential. Walking to a nearby town could take up to 10 hours of real time, while a far off town in another province could take several days.

The game is played from a first-person perspective. Combat is performed by clicking the right mouse button and dragging it across the screen, as if swinging your weapon. Magic is used by clicking on the magic menu, selecting your spell, and clicking where you want to shoot it. There is also the ability to pickpocket people on the street, or break into a store at night.

Arena was one of the first games to have a day and night cycle, with stores closing at night, people getting off the streets, and monsters (Orcs, Lizard Men, etc.) wandering around towns at night.

The actual main quest is completed by finishing all 17 developer-made dungeons and completing the Staff of Chaos, but there are other quests as well. Asking about rumors in a town will lead to someone telling you about someone in a bar that may need help. These "miscellaneous" quests are very simple, ranging from simple delivery missions to finding an artifact item after going through a dungeon.

Another notable fact about Arena is that it has a tendency to be unforgiving towards newer players. It is easy to die in the starting dungeon, as powerful enemies can be encountered if the player lingers too long. However, this effect slowly withers away as the player becomes more powerful and more aware of the threats that loom everywhere. Even Ken Rolston, lead designer of The Elder Scrolls III: Morrowind, says he started the game at least twenty times and only got out of the beginning dungeon once.

"For centuries different factions battled in petty wars and border conflicts, until in 2E 896 Tiber Septim crushed all those who opposed him and took control, proclaiming himself as Emperor. Still, the bitter years of war had its affect on the populace. The name Tamriel, Elvish for 'Dawn's Beauty', seldom fell from anguished lips and was soon forgotten. In a place where life and death were different sides of the same coin tossed every day, the people of the known world began calling the land of their sorrow, the Arena... Now, 492 years after TIber Septim took control and kept the peace, the land of Arena has a new threat. The Emperor, Uriel Septim VII celebrates his forty-third birthday. But jealous hearts desire the throne and plot his downfall. It is said that hope flies on death's wings. Prepare then, for as the Elder Scrolls foretold, it will be here that your adventure begins... Uriel Septim IV, Emperor of Tamriel, stands with Talin, leader of the Imperial Guards. They have been summoned by Jagar Tharn, Imperial Battle Mage of the Empire, on rumors of treachery... The Emperor is betrayed... And transported to a dimension of Tharn's choosing... After months of preparation Jagar Tharn, takes the throne... Ria Silmane, once Tharn's apprentice, is captured before she can warn the Elder Council of the Imperial Battle Mage's treachery... Manipulating the essence of magic, Tharn prepares to take the true Emperor's place as ruler of the known land... The Imperial Wizard wastes no time in gathering his servants... And turning them into twisted counterparts of the Emperor's Guard..."[2]

"It is said that hope flies on death's wings. Prepare then, for as the Elder Scrolls foretold, it will be here your adventure begins..."
―Arena's Introduction

Imperial Battlemage Jagar Tharn summoned both Emperor Uriel Septim VII and General Talin Warhaft on rumors of treachery. But Jagar Tharn betrays the two, and teleports them into another dimension. Tharn's apprentice, Ria Silmane, witnesses his treachery and tries to warn the Elder Council, but is killed by Tharn, her corporeal form being destroyed by the Staff of Chaos. Jagar Tharn transforms himself into the image of the Emperor and takes the throne, shapeshifting demonic minions into the Emperor's Guard, and sends a low-ranking member of the Emperor's court, the player's character and later the "Eternal Champion," into the Imperial Dungeons to die. Ria Silmane becomes incorporeal through the use of magic, and remains in Tamriel so that she can warn the prisoner that the Emperor is actually Tharn in disguise.

Ria creates a cell key to aid in the escape, and teleports the prisoner to another province through the use of a Shift Gate. The only way to stop Tharn is to obtain the Staff of Chaos, and use its magical energies, but the Staff has been split by by into eight pieces, and scattered across the continent. Being the only one Ria can trust, the prisoner must travel to Tamriel's most dangerous dungeons and mazes to recover all eight Staff pieces.

Finally, in 3E 399, after a long quest to reassemble the pieces, the Staff of Chaos is reassembled. However, Tharn was not defeated as hoped; in an attempt at becoming immortal, he drained the Staff of its power and combined it with his lifeforce within an artifact named the Jewel of Fire. The prisoner fought their way through the Imperial Palace to the dungeons, and engaged in a cataclysmic battle. The prisoner united the Staff with the Jewel, melting Tharn, and creating a portal to the dimension in which the Emperor and General Warhaft were being held. They fall out of the portal, and Talin becomes Tamriel's Eternal Champion as a reward for saving them.

The autorun menu upon starting Arena.

Ria Silmane, a character in Arena.

The default Nord Knights in Arena. 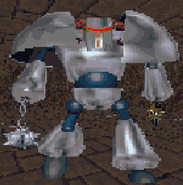 An Iron Golem, a type of monster in Arena.

Беларуская Čeština Deutsch Español Suomi Français Magyar Íslenska Italiano 日本語 Nederlands Polski Português Русский Українська
*Disclosure: Some of the links above are affiliate links, meaning, at no additional cost to you, Fandom will earn a commission if you click through and make a purchase. Community content is available under CC-BY-SA unless otherwise noted.
Advertisement