"Redguard is an action adventure, set in the vast world of The Elder Scrolls. A departure from the hard-core RPG's of Arena and Daggerfall, Redguard combines elements of adventure games with swashbuckling duels and sets them in a living 3D world."
―Redguard FAQ[1]

The Elder Scrolls Adventures: Redguard is an action-adventure game developed and published by Bethesda Softworks with a third person style reminiscent of the Tomb Raider games, set in the world of The Elder Scrolls. It is one of the spin-off titles in the series, and also one of the earliest.

The game takes place in Tamriel in the year 864 of the Second Era, some 400 years prior to the events of Arena and the rest of the main series. The story is about Cyrus, a young Redguard, who arrives on the island of Stros M'kai in order to find his missing sister, and subsequently finds himself in the middle of political intrigue.

It is late in the Second Era, a time of war as the Empire of Tiber Septim sweeps through the kingdoms of Tamriel in a glorious bid for conquest. Septim is opposed on all sides, but never more fiercely than by Hammerfell the ancestral home of the Redguards. The High King of Hammerfell, Thassad II resists the Imperial invasions even as he sees other kingdoms crumble until, at last, without warning and surprisingly devoid of court treachery, death takes its full measure. With its High King dead, Hammerfell is crippled plunging into a bloody civil war between the Crowns, fighting for their homeland's continued sovereignty, and the Forebears, who have finally accepted the Emperor's rule. The Crowns, led by the heir to Thassad, Prince A'tor, are continually victorious, spilling the blood of the Forebears across Hammerfell's sands. From his seat of power in the port city of Stros M'kai, Prince A'tor slowly reunites his father’s unraveled kingdom. Feeling their impending defeat, the Forebears sign a pact with the Emperor, allowing him to bring his armies in, crush the Crowns, and rule Hammerfell as his own. Tiber Septim's armies prove too much for the proud Redguard Crowns.

Tiber Septim sends his best commander, Lord Richton, to Stros M'kai to close the grip on Prince A'tor and the Crowns. The prince rallies his forces for one last stand. Knowing that Hammerfell's sovereignty is at stake, the Crown forces match the might of the Empire meeting them in the harbor of Stros M'kai for the final battle. The fighting is fierce. Lord Richton, having seen the Prince's victories at sea before, decides to bring his last resource to the fore...

...the Dragon, Nafalilargus, proud jewel of the Imperial crown. A'tor commands his archers to ready their weapons...

...but is struck down himself by Richton’s assassin, felled by an arrow whose poison spreads too fast. A'Tor's wizard attempts to save the Prince but the dragon ends his magic, and the Crown's hope for victory, in a single, fiery breath. Having conquered the Crowns, the Emperor’s forces claim rule over all of Hammerfell. Imperial garrisons are stationed at every city and Richton himself is named Provisional Governor of Stros M'kai. Months pass. The Redguards of Hammerfell, both Crown and Forebear, learn to live under the new Imperial rule and Tiber Septim extends his reach into the rest of Tamriel. It is only through fate that any of this will come to concern our hero Cyrus, a redguard who long ago left Hammerfell to wander the borderlands of the Empire.[2]

Redguard runs in MS-DOS and features a software mode as well as a 3D accelerated mode for computers with a Voodoo2 graphics card. The game's manual also included a section called the Pocket Guide to the Empire (often abbreviated as PGE, or PGttE), in which details were given on all the provinces of the Empire during that era. This guide is written from the point of view of an Imperial, and has several handwritten notices in it written by an anti-imperial. Lastly, in some distributions of the game, the map that was provided in the box was partially burnt to provide an additional level of authenticity.

Early copies of Redguard also shipped with a comic book depicting the events that led up to Cyrus' adventure on Stros M'kai, known as The Origin of Cyrus.

The following are the requirements to run the game:[1]

Artwork of several characters in the game. 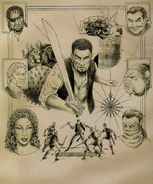 Artwork of all main characters in the game.

Artwork of the protagonist of Redguard: Cyrus.

Беларуская Čeština Deutsch Español Français Bahasa Indonesia Italiano Polski Русский Українська
*Disclosure: Some of the links above are affiliate links, meaning, at no additional cost to you, Fandom will earn a commission if you click through and make a purchase. Community content is available under CC-BY-SA unless otherwise noted.
Advertisement