For other uses, see Bloodmoon.

In the Bloodmoon main quest, the Nerevarine starts by doing odd jobs for the Imperials' Fort Frostmoth on Solstheim. When the fort is attacked by werewolves, the Nerevarine must travel to the Nord village of the Skaal at the north of the island.

The Nerevarine must then perform several rituals to be accepted into the village. Afterwards, knowledge of the Bloodmoon Prophecy, a ritualistic hunt led by the Daedric Lord Hircine, is revealed. The Daedric Prince takes the four greatest champions on Solstheim, including the Nerevarine, to his glacier home. He tells them that they must fight until only one is still living; if the Nerevarine survives, they must fight one of Hircine's aspects — strength (a bear), speed (an elk), or guile (where Hircine fights in his own form).

The main quest is completed once the battle is won and the glacier home is fled. 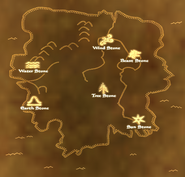 Solstheim, the setting of Bloodmoon.
Беларуская Deutsch Español Français Bahasa Indonesia Italiano 日本語 Nederlands Polski Русский Українська
*Disclosure: Some of the links above are affiliate links, meaning, at no additional cost to you, Fandom will earn a commission if you click through and make a purchase. Community content is available under CC-BY-SA unless otherwise noted.
Advertisement