The Elder Scrolls IV: Knights of the Nine

The Elder Scrolls IV: Knights of the Nine

3E 433
The Elder Scrolls IV: Knights of the Nine is the first official expansion for the fourth installment in The Elder Scrolls series, Oblivion. Announced on October 17, 2006 for release on November 21, 2006, the expansion was developed, published, and released in North America by Bethesda Softworks. In Europe, the game was co-published with Ubisoft. The expansion, along with Shivering Isles, was later included in the Game of the Year edition, as well as the 5th Anniversary Edition of Oblivion.

The Windows version is available either as a download from the company website or as part of the retail-released Oblivion Downloadable Content Collection CD—a release that also includes all official downloadable content available for Oblivion. The Xbox 360 version is available via Xbox Live Marketplace, and the PlayStation 3 version of Oblivion includes Knights of the Nine in its packaged release.

Knights of the Nine centers around a faction of the same name, devoted to locating and preserving a set of "Crusader's Relics." Once found, these relics must be used to defeat the sorcerer-king Umaril, who seeks revenge on the Nine Divines. Knights of the Nine was generally well received in the gaming press. Although it made little change to the basic mechanics of Oblivion, it was praised by some reviewers as a brief and polished addition to the game's main plot.

Knights of the Nine changes little of Oblivion's gameplay; it includes a new quest line, enemies, items and explorable regions, but nothing of the game's engine, interface or basic design.

Knights of the Nine is an example of open-ended or sandbox-style gameplay; the main quest may be delayed or completely ignored as the player explores the game world, follows side quests, interacts with characters, and develops a character according to their own taste. Furthering the goal of open-ended gameplay, Knights of the Nine, unlike Bethesda's prior content packs for Oblivion, begins with no explicit prodding towards the newly introduced content; players must seek out and find the game's quest without external aid.

Knights of the Nine's central quest begins as the player approaches the Chapel of Dibella. The chapel is the site of a recent attack; its priests and priestesses have been cut down, and its altar desecrated. The player proceeds to consult a local prophet for guidance. The prophet reveals that the man responsible for the attacks is Umaril, an ancient revenge-seeking sorcerer-king. Umaril, the prophet states, may only be defeated by a divinely-favored Crusader bearing the relics of the man who had first killed him, Pelinal Whitestrake. Although he had killed Umaril's body, Pelinal had not finished the job: he did not destroy Umaril's spirit. The player pledges to the prophet that he will quest for the relics and destroy Umaril completely, accomplishing what Pelinal had failed to do.

The player commences on a journey to retrieve the relics; taking the helmet, cuirass, boots, mace, shield, gauntlets, greaves, and sword of the Crusaders in succession. Along the way, additional characters join the player's quest. Together, they recreate the titular Knights of the Nine, a faction once pledged to defend the relics but whose former members are all long dead. With the relics united and the order reborn, the player sets off to fight Umaril in his temple at Garlas Malatar. The Knights fight and defeat Umaril's minions, and the player slays the mortal body of Umaril. The player then follows Umaril into the spirit realm, and destroys Umaril's soul. Returning to the land of the living, the player is greeted with the grateful cheers of the Knights, praising the gods for their grace.

Prior to any announcement regarding Knights of the Nine, Bethesda had pursued a somewhat novel plan to distribute downloadable content through micro-payments, priced from US$0.99 to US$2.99, instead of the more common practice of releasing expansion packs. The program was initially met with criticism by customers due to its alleged low value, but later releases—at a reduced price, and with more content—proved more popular. The releases, in addition to stirring controversy, raised questions regarding Bethesda's future content release plans, and as to whether expansion pack releases were necessary at all. In August 2006, one Bethesda employee wrote in a post to Bethesda's Elder Scrolls forums that the company had "no plans to make an expansion for Oblivion". Further questions were raised by a product listing found on game retailer GameStop's website September 11, 2006, listing a Knights of the White Stallion Expansion Pack for Oblivion. The game had a listed shipping date of November 21, 2006 and a US$19.99 asking price. The title was kept on the website only briefly—removed after gaming news site GameSpot sent Bethesda a request for comment on the product.

Knights of the Nine began its life as a supposedly "exclusive" quest for the PlayStation 3 release of The Elder Scrolls IV: Oblivion. Along with the confirmation of the PlayStation 3 release on October 9, 2006, some gaming news websites reported that the release would contain "a huge, exclusive quest" focusing on "a new faction, The Knights of the Nine". Some reports prefixed "allegedly" onto statements that the release would be exclusive. Suggestions of exclusivity, in any case, did not last long: an October 17, 2006 Bethesda press release announced that Knights of the Nine content was also scheduled for PC and Xbox 360 releases, eliciting commentary from Joystiq remarking on "how finicky" the word 'exclusive' had come to be, and Kotaku remarking on how "Oblivion PS3 content didn't stay exclusive for long... or at all". Other sites saw no incongruence in the announcement: GameSpot assumed that Knights of the Nine was simply the earlier "Knights of the White Stallion" by a different name, and 1UP.com had anticipated the move ever since an IGN interview with Oblivion's Executive Producer Todd Howard, where Howard had described Bethesda's general aim "to have all our content available across all platforms"; the final announcement served only to confirm their suspicions.

The October 17 press release set November 21, 2006 as the North American distribution date for the Xbox 360 and PC versions of Knights. The European release for the Xbox 360 and PC was set two days later, on November 23. The European release was co-published by Bethesda and Ubisoft. On November 9, 2006, Bethesda clarified earlier statements regarding PC releases, declaring that, although the boxed retail PC edition of Knights of the Nine was set for release on November 21, the PC release downloadable from the company website wouldn't be available until December 4. This caused some consumer complaints, for although the Xbox 360 release was available on the Xbox Live Marketplace for 800 Microsoft Points (the equivalent of US$10.00, or GB£6.80), for the time being, PC owners had only the US$19.99 boxed retail edition of the game. The increased price of the PC's boxed retail release resulted from its inclusion of Oblivion's other downloadable content: Horse Armor, The Orrery, Wizard's Tower, Vile Lair, Thieves Den, Mehrunes' Razor, and Spell Tomes. Such content was not included in either the downloadable PC release, the Xbox Marketplace download, or the PlayStation 3 edition of Oblivion. The downloadable release was ultimately issued on December 6 at the price of US$9.99. According to IGN Entertainment's GamerMetrics, a service based on compiled visitor activity information on IGN's website, the pack was the fourth most anticipated release of its release week, following Tom Clancy's Rainbow Six: Vegas, Superman Returns, and College Hoops 2K7.

Knights of the Nine was generally well received in the gaming press. Metacritic, an aggregate review site, scored the PC version of the game with an 81 out of 100, and the Xbox 360 version of the game with an 86 out of 100. GameSpot recommended the game for its value; although it made few improvements over the basic Oblivion experience, Knights of the Nine provides "a good day or two's worth of questing for a low price". Similar comments followed from GamePro, who found that the "polish" and "affordable price" of the pack excused the fact that the pack's content "doesn't really change [Oblivion's] gameplay". Eurogamer praised the game for its memorable plot and new, unique content. They concluded that if "more of the same is what you're after, you can't really argue with what Bethesda's served up for its hardcore fans." The review encouraged caution nonetheless; for if consumers were to fully accept individually priced content releases, Bethesda might just begin charging for all its quests. 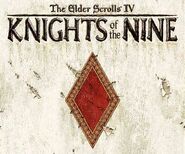 A Knights of the Nine cuirass. 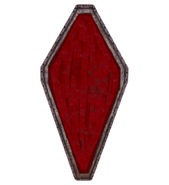 A Knights of the Nine shield.

Umaril, the primary antagonist in Knights of the Nine.
Беларуская Deutsch Español Français Italiano Polski Русский Українська
*Disclosure: Some of the links above are affiliate links, meaning, at no additional cost to you, Fandom will earn a commission if you click through and make a purchase. Community content is available under CC-BY-SA unless otherwise noted.
Advertisement