The additional content was later packaged with the Game of the Year edition, and as well as with The Elder Scrolls IV: Oblivion 5th anniversary edition.

Bethesda Softworks officially announced The Shivering Isles was a planned expansion for The Elder Scrolls IV: Oblivion on January 28th, 2007.[2] The game officially released for Microsoft Windows platforms on May 26th and 27th of that year, costing 2600 Microsoft Points. The release for PlayStation 3 came in November of that year.

The realm is divided into two sections: Mania, which is bright, colorful and over-saturated, and Dementia, which is dark, depressing and claustrophobic. Near the eastern shore of the Shivering Isles lies the capital and only city of New Sheoth.

One third of the city (Bliss) looks like and represents Mania. Another third (Crucible) looks like and represents Dementia. The final third is divided into half of both, and is known as the Palace District. The Isles are threatened by an event called the "Greymarch" which happens at the end of each era and a champion must save them from possible destruction at the behest of Sheogorath.

The Realm of Madness is considerably different in both look and feel than anything in the land of Cyrodiil. Lead designer Mark Nelson stated that the reason for the drastic change in theme was because "People want to explore a new realm. Besides if you've played Oblivion for 200 hours, you've gotta be sick of gray stone castles."

The new expansion pack has been estimated to have an additional 30–40 hours of gameplay available to players, and the Realm of Madness is said to be 25% of the size of Cyrodiil. There are 32 unique ingredients added to the expansion, 10 new achievements, 10 new creatures (with different leveled versions), 9,500 new lines of dialogue, 200 new weapons and 80 pieces of armor and clothing. As with Oblivion, the player can take on the Main Quest, Side Quests, or ignore them altogether.

Upon entering the Shivering Isles, the Hero of Kvatch is limited to an area called the "Fringe". The Fringe is a small area which acts as a portal from the mainland of the Shivering Isles. To enter the realm itself, a massive guardian called the Gatekeeper must be defeated. Defeating the Gatekeeper may be a challenge because he has very high defense and attacking power, as he protects Sheogorath's realm from uninvited intruders.

The Hero can choose to team up with Jayred Ice-Veins to help defeat the Gatekeeper although this is not mandatory. The Hero must construct a new one to replace the one they defeated during a later quest. There are several new enemies, which include: three types of mages (Heretics, Zealots and Apostles); the Elytra, a large insect that utilizes a variety of poisonous attacks; the Gnarl, a tree-like humanoid; and Grummites, a primitive frog-like species that is much like the goblins in Cyrodiil, as well as their supposed larval form (Baliwogs).

There are new spells that include the ability to summon Sheogorath's personal servant, Haskill, and a creature returning from The Elder Scrolls II: Daggerfall, the Flesh Atronach. Using materials found on the Isles called "Madness Ore" (easily found with Grummites or in their lairs; used to make heavy armor with high armor ratings) or "Amber Ore" (easily found with Gnarls or in their lairs; used to make light armor with lower armor ratings than the Madness equivalent) and templates for armor called "Matrixes" (Matrix), new types of armor can be forged. Either normal armor can be forged using the Madness Ore or Amber alone, or these can be combined with the appropriate Matrices to form the same armor piece with added magical properties.

The Hero can also choose to side with either the Golden Saints or the Dark Seducers and become the duke/duchess of either Mania or Dementia during the main quest.

It is revealed during the course of the main quest that Sheogorath is actually Jyggalag, the Daedric Prince of Order that was cursed by the other princes to become the Prince of Madness, and he may only show his true form at the end of each era, during the Greymarch. At the end of the main quest, the Hero fights and defeats Jyggalag, and is then proclaimed the new Prince of Madness which heralds the beginning of the process of apotheosis.

The Hero receives several new powers including the ability to freeze a battle with the Staff of Sheogorath, to change the weather in the Shivering Isles which provides random stat boosts and a protection spell which teleports the player to safety and healing in Sheogorath's castle when they are near death. These abilities can only be used within the Isles. They also have the opportunity to call for a dancer, have a Golden Saint or Dark Seducer royal guard escort you and have access to an unlimited supply of combat-based mini-quests that involve defending the Gates of Madness or any of the towns from intruders or wild creatures respectively.

One can choose to perform these quests either by sending their guards (500 gold reward) or by taking care of it themselves (1,000 gold reward). As an end game reward, they are given a set of Sheogorath's powerful enchanted clothing and Jyggalag's sword, which functions as an unenchanted claymore in the Hero's hands.

Introduced with the expansion were a plethora of new items, ranging from an array of unique potion ingredients to new armor and weapons.

A smith in Bliss can craft Amber Armor and Amber Weapons from Amber, whenever it is collected around Shivering Isles. These new items can be enchanted at the Arcane University or with the Sigil Stone.

A smith in Crucible can craft Madness Armor and Madness Weapons from Madness Ore whenever it is collected throughout the Shivering Isles. Madness armor and weapons can be enchanted at the Arcane University or with the Sigil Stone.

This new blade shifts between Fire damage and Frost damage, depending on the time of day. Each kill made by the blade bolsters its might. At daytime, the gem in the hilt is orange, however, at night, the gem will be purple.

There are a number of Grummite weapons wielded by Grummites.

Shivering Isles received positive reviews from critics, most of which ranked the game in the upper 80s out of 100.[3][4][5] 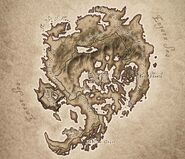 A Golden Saint, a type of Daedra that serves Sheogorath.

The Dark Seducer, a type of Daedra that serves to Sheogorath.

The Defender, an attainable rank for the Hero in Shivering Isles.

Entrance to the Shivering Isles.

Dervenin, the head priest of Sheogorath in the Shivering Isles.

Беларуская Deutsch Español Français Italiano 日本語 Nederlands Polski Português Русский Українська
*Disclosure: Some of the links above are affiliate links, meaning, at no additional cost to you, Fandom will earn a commission if you click through and make a purchase. Community content is available under CC-BY-SA unless otherwise noted.
Advertisement