The premise for the storyline involves helping Divayth Fyr uncover a Daedric conspiracy going on in the city, and find out what happened to Sotha Sil.[3] It will also continue the Daedric War story arc from previous DLCs.[3] 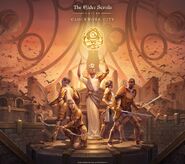 Causeways and ramparts of the Brass Fortress promotional wallpaper

Беларуская Deutsch Español Italiano Polski Русский
*Disclosure: Some of the links above are affiliate links, meaning, at no additional cost to you, Fandom will earn a commission if you click through and make a purchase. Community content is available under CC-BY-SA unless otherwise noted.
Advertisement