For the item, see Dragon Bone.

"An ancient power re-awakens and threatens all of Tamriel in The Elder Scrolls Online's newest DLC game pack, Dragon Bones. This February, you can discover two exciting new dungeons and enjoy a host of base-game additions and improvements with Update 17."
―Official Announcement[1] 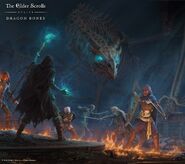 Беларуская Deutsch Italiano Polski Русский
*Disclosure: Some of the links above are affiliate links, meaning, at no additional cost to you, Fandom will earn a commission if you click through and make a purchase. Community content is available under CC-BY-SA unless otherwise noted.
Advertisement