watch 01:23
'The Elder Scrolls Online: Horns of the Reach' – Official Trailer
Do you like this video?

The Elder Scrolls Online: Horns of the Reach

"Horns of the Reach, The Elder Scrolls Online's latest DLC game pack, will be available in the in-game Crown Store and as part of ESO Plus membership this August. The DLC game pack will include two new dungeons, Bloodroot Forge and Falkreath Hold, as well as a base game update that features a new Battlegrounds map and game type and a host of quality-of-life improvements."
―Official Announcement

These will be free, however, The Elder Scrolls Online: Morrowind will be required to play Battlegrounds.[1] 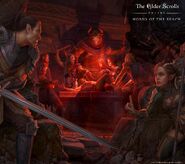 Retrieved from "https://elderscrolls.fandom.com/wiki/The_Elder_Scrolls_Online:_Horns_of_the_Reach?oldid=3111360"
*Disclosure: Some of the links above are affiliate links, meaning, at no additional cost to you, Fandom will earn a commission if you click through and make a purchase. Community content is available under CC-BY-SA unless otherwise noted.