View source
watch 02:46
The Quarry - The Loop
Do you like this video?
Play Sound

The Elder Scrolls Online: Tamriel Unlimited: Imperial City costs 2500 Crowns and was released on August 31st for PC/Mac players, September 15th for Xbox One players and September 16th for PS4 players. It is free to all existing ESO Plus members.

The Imperial City was the seat of power in Tamriel and the heart of the Empire, the sought-after prize of the Alliances—until the forces of Molag Bal and his minions seized control of it and made it the heart of the Planemeld, the dark plan put together by Molag Bal. The Imperial Legion is calling for reinforcements to recapture the city from the forces of Coldharbour, but the Three Alliances also seek it for themselves as part of their long and bloody war.

Battle your way through hordes of Daedra, Worm Cult Sorcerers, Daedric machinations and the elite Xivkyn and help either the Imperial Legion or your Alliance recapture the heart of Tamriel!

Most features of the expansion, such as the level cap increase, will be free.

The DLC Pack brings 2 new main zones located in the center of Cyrodiil:

The Imperial City is huge, larger than all the other zones except Cyrodiil. The sewers are even larger than the city proper, and there is a lot of content to do.

And the sewers are divided into 10 areas:

This nameless, enigmatic assassin serves the remnants of the Akaviri Dragonguard. She is one with the shadows, preferring not to talk with people or make conversation. Despite her mysterious nature, she is often credited with creating brutal scenes featuring cultists' severed heads and dead Daedra. When the Vestige meets her in person, she is shown to be rather awkward and shy, clearly not the sort of person who has social interactions often. Nonetheless, she remains determined to drive out Molag Bal.

The seasoned Captain Caudex of the Imperial Legion is the de facto leader of the Resistance in the city. He and his men hold the line against the seemingly infinite hordes of Daedra and corrupted legionnaires from the Memorial District Forum, a garrison which serves as one of the only safe havens in the city. He is a stern, determined man, never giving in despite all odds being against him and his men.

This young Dremora woman of Foolkillers Clan was an outcast, the runt of the litter, a slave, rather than a servant. She would forcefully toil endlessly to aid Molag Bal in his dark plots. Now she has turned against him, choosing to help the Vestige stop the Daedric Prince. She is a sort of "oddball" among Daedra, viewing much of them with disdain and disgust. She seems to only help based on an "enemy-of-my-enemy" agreement, but she is not hostile, unlike most things in the corrupted city. Being a Daedra herself, she is a valuable asset to the Resistance and to the Vestige.

A devout priest who preferred to wander the calm streets of the Temple District before the Anchors fell, Egnatius knows much information about many things—information that could be useful in Molag Bal's dark plans for the city. However, he is not the sort of person who would give away valuable assets to the enemy, making him a useful ally. He is quite stubborn and determined, and is a key asset in the quest to ultimately rout the Daedra.

Empress-Regent Clivia Tharn, the daughter of High Chancellor Abnur Tharn, is the current official occupant of the Ruby Throne in the White-Gold Tower. She is no friend of the Daedra, despite her making a pact with the Worm Cult in a desperate attempt to keep the Empire from collapsing, and while she has made many other deals with Daedra, she was never their ally.

Encounter in the Imperial City wallpaper 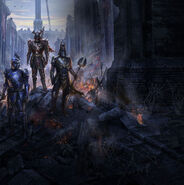 Confrontation in the Imperial City

Беларуская Deutsch Español Français Italiano Polski Русский Українська
*Disclosure: Some of the links above are affiliate links, meaning, at no additional cost to you, Fandom will earn a commission if you click through and make a purchase. Community content is available under CC-BY-SA unless otherwise noted.
Advertisement