For other uses, see Dawnguard.

Released first for the Xbox 360 on 26 June 2012, and later on 2 August for PC, Dawnguard revolves around an ancient prophecy predicted by an Elder Scroll. Foretelling the eternal obfuscation of the sun, the scroll gave instructions on how to perform a magic ritual with a mythic bow and a special blood sacrifice. A legion of vampires known as the Volkihar Clan, lead by Lord Harkon, seek to actuate the prophecy by performing the ritual; the Dawnguard, a faction of crossbow-wielding vampire hunters counters their aims. Skyrim's Dragonborn protagonist chooses whether to join the Dawnguard and prevent Nirn from being plunged in irrevocable night, or assist the vampire coven with realizing their malevolent ambition.

Introduced in Dawnguard are two unique skill trees, one for vampirism noted as "Vampire Lord" and one for lycanthropy.

Twenty-two quests featured in the plug-in; twelve exist in the main quest, with several optional side quests. A few repeatable, radiant quests can also be completed. The questline forks at "Bloodline," where allegiance between the Volkihar Clan and the Dawnguard must be selected. Choice of side is irreversible.

Factions
The two main factions central to the add-on are the Dawnguard, an order of vampire hunters dedicated to eradicating vampires, and the Volkihar Clan, a shadowy group of vampires who seek to blot out the sun.
Quests
The main questline consists of 12 quests that take place across Skyrim and beyond. 9 side quests for each faction are available, along with 4 additional side quests that are unrelated to the storyline.
Characters
Over 80 new characters are introduced in the add-on, most of whom are members of the newly added factions.
Locations
23 new locations are included throughout Skyrim, including 2 large completely new areas: the Soul Cairn and Forgotten Vale.
Creatures
Several creatures and variants of existing creatures are added, including the new maximum level Legendary Dragon, Frost Giant and Chaurus Hunter.
Magic
A plethora of Dragon shouts, blessings and spells are introduced along with full perk trees for Lycanthropy and the Vampire Lord.
Weapons
19 new weapons, including the long-awaited Dragonbone weapons set, along with a variety of crossbow bolts and arrows.
Armor
5 new armor sets are introduced into the add-on, not to mention several unique pieces in both light and heavy variants.
Items
5 new alchemy ingredients, several new books and pieces of jewelry along with some unique items.

The story of The Elder Scrolls V: Dawnguard involves the return of a Volkihar vampire lord named Harkon, who seeks to end the tyranny of the sun. Harkon intends to use the power in the ancient Elder Scrolls to accomplish his goal, while an order of vampire hunters known as the Dawnguard seek to stop him.[1][2]

The Dragonborn is given the option either join the Dawnguard and help defeat Harkon or join forces with the Volkihar vampires.[1][2]

Dawnguard can be started by listening for rumors or asking Hold Guards about a group of vampire hunters who are recruiting. This will steer the Dragonborn in the direction of Fort Dawnguard, and the add-on will begin.[2]

Joining forces with Harkon allows the Dragonborn to become a Vampire Lord - the paragon of the species. If the Dragonborn is already a Werewolf, accepting to become a Vampire Lord will remove the Lycanthropy, but it can be regained later.[3] The transformation process works similar to Lycanthropy and grants access to unique powers. One such ability is Vampiric Grip, which suspends an enemy in the air with telekinesis as their health is drained. Other powers and abilities include summoning a gargoyle, hovering above the ground and transforming into a cloud of bats.[1][2]

As with Lycanthropy, townspeople will attack a transformed Vampire Lord on sight, however this will no longer happen if the Dragonborn is a regular vampire. Unlike werewolf transformations, the vampire form can be exited at will.[2]

In addition to new powers, joining the vampires grants access to Castle Volkihar - an island stronghold that not only serves as a base, but grants bonuses to vampiric powers and gives blood potions, which heal and count towards vampiric feeding.[2]

Joining the Dawnguard grants the Dragonborn access to Fort Dawnguard, a large keep said to be hidden somewhere in the southern region of Skyrim.[4] The unique benefits of joining the Dawnguard include various new weapons and armor to fight vampires, including crossbows.[1][2] Furthermore, Dawnguard members will also be able to "hire" Armored Trolls, which serve as temporary followers.[3]

The Elder Scrolls V: Dawnguard introduces two new perk trees: Vampire Lord and Werewolf. Rather than spending points to add perks as in the base game, new perks are gained by feeding on enemies with the new powers. For vampires, consuming life blood through a bite power attack or a Vampiric Drain spell causes new perks to be gained; for werewolves, it is consuming the heart when feeding on a dead corpse.[5] This approach allows high or maximum level characters to obtain new perks that would otherwise be difficult or impossible to obtain.[2] 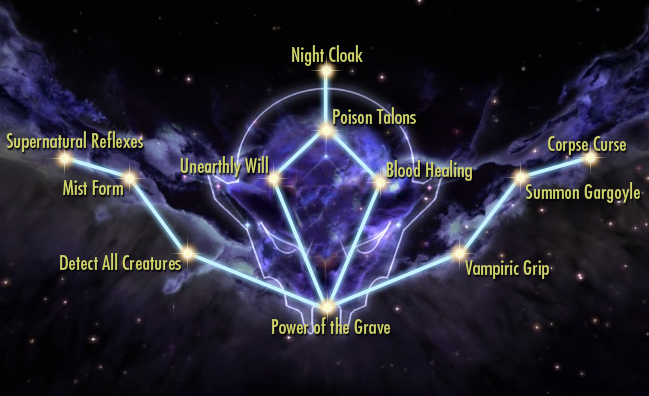 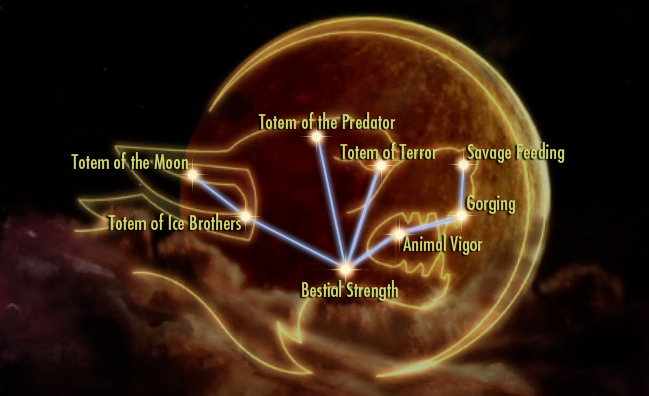 *The quest "Totems of Hircine" must be completed before these will become usable.

Dawnguard introduces several new additions to both ranged and melee combat. The first new addition is the inclusion of Dragonbone weapons, which are stronger than Daedric Weapons.[8]

Crossbows are added to the arsenal of weapons at the Dragonborn's disposal. Crossbows remain loaded while running through the world and provide a quicker shot. They are, however, slower to reload than bows. Another benefit is that each shot has a chance to stagger an opponent. All of the perks spent in Archery skill tree apply to crossbows.[2] Crossbow bolts can also be crafted with various enchantments, such as fire and frost damage.[5]

New shouts are also included in the add-on. One shout called Soul Tear can be learned from Durnehviir, an undead Dragon found in the Soul Cairn.[8] This shout allows the Dragonborn to steal the soul of a defeated enemy and raise their soul as an undead minion.[2]

A plane of Oblivion known as Soul Cairn, an ethereal realm of trapped souls, is a new location that can be visited in Dawnguard. It can be accessed via a mysterious portal in Castle Volkihar.[1][2]

In addition, the Dragonborn can complete a side quest to free an undead skeletal horse named Arvak. This mount can then be summoned at will and is not restricted to the undead realm.[4][5]

Legendary Dragons are the new maximum-level Dragon class. In addition to Legendary Dragons, new enemies such as Gargoyles, Death Hounds, Armored Trolls can be also encountered.[1][2] Within the Soul Cairn realm some of the enemies include Bonemen, Wrathmen, Keepers and an undead Dragon named Durnehviir.[7][5]

. Race and gender are locked, but other facial features can be tweaked.[2]

A preview trailer was released by Bethesda on 31st May 2012 that showed various aspects of the add-on.

You have found our fortress.
You have returned my daughter.
But what is it you seek?
Is it to be one of us?
To make the darkness your own?
To feast on the souls of the living...and the dead?
Or are you with them?
The Dawnguard.
They think they can stop us.
But we will find them.
The Elder Scrolls will be mine.
And the tyranny of the sun shall end.

The trailer begins by showing a mysterious fortress on an island, known as Castle Volkihar. The leader of the vampire faction, Harkon, narrates that the Dragonborn has found their fortress and returned his daughter, who is shown carrying an Elder Scroll on her back. An altar that bears a resemblance to the Altar of Molag Bal in Markarth is shown, which seems pertinent as Molag Bal is considered to be the creator and patron deity of vampires.[9][10] The trailer then depicts the transformation process in becoming a Vampire Lord and a new vampire feeding cinematic.

Fort Dawnguard is shown and the inclusion of crossbows is confirmed. The trailer then shows the Dragonborn fighting a variety of creatures, including a gargoyle-like creature, an ogre-like giant and a vampire who bursts into a cloud of bats. Also included in the trailer is an example of mounted combat, an undead skeletal horse and a Dragon that dives into a frozen lake. The Dragonborn is also shown opening an Elder Scroll, then a map of Skyrim comes into view with the symbols for Markarth and Solitude labeled in red.

The trailer concludes with the sun being blotted out above Dragonsreach in Whiterun, as a Dragonborn with glowing eyes walks toward the perspective.

Dawnguard became available for download on Steam on 2 August 2012 in English, Spanish, German, and French.

The PlayStation 3 version was delayed according to a Bethesda Softworks spokesperson who said, "We are not satisfied yet with Dawnguard's performance on the PS3," in an interview.[12]

Following the success of PC beta updates, Bethesda announced a Dawnguard Beta for Xbox 360 on 1 June 2012. Bethesda selected applicants in the third week of June, and those accepted, receive an Xbox LIVE code to redeem the full version of Dawnguard.

A portal to Soul Cairn.

A crossbow in first-person.

Беларуская Deutsch Español Suomi Français Bahasa Indonesia Italiano 日本語 Nederlands Norsk Polski Português Русский Українська 中文
*Disclosure: Some of the links above are affiliate links, meaning, at no additional cost to you, Fandom will earn a commission if you click through and make a purchase. Community content is available under CC-BY-SA unless otherwise noted.
Advertisement