The plot involves traveling to the island of Solstheim and the return of a mysterious former dragon priest called Miraak, one-time ruler of the island. Unlike the ancient dragon priests of Skyrim, Miraak was Dragonborn, supposedly the first person to be gifted with the dragon blood, and he possesses the ability to absorb dragon souls, much like the Last Dragonborn.

In addition, the add-on features a plethora of new quests, characters, dragon shouts, armor, weaponry and the ability to tame and ride dragons.

Quests
The main questline consists of 7 quests that take place across Solstheim and beyond. 28 side quests are available along with many more miscellaneous quests.
Characters
Over 90 new characters are introduced in the add-on.
Locations
Over 90 new locations are included throughout Solstheim, including Hermaeus Mora's plane of Oblivion, Apocrypha.
Creatures
Several familiar creatures returning from The Elder Scrolls III: Bloodmoon, along with new creatures, including the Serpentine Dragon, Ash Spawns, Seekers and Lurkers.
Magic
A plethora of Dragon shouts, abilities, powers, scrolls and spells are introduced. Including one shout that grants the ability to ride dragons.
Weapons
Over 30 weapons, including two brand new craftable weapon sets: Stalhrim and Nordic.
Armor
Four brand new craftable armor sets are introduced in the add-on: Bonemold, Chitin, Stalhrim and Nordic. In addition, several unique pieces and sets in both light and heavy variants.
Items
11 new alchemy ingredients, over 70 new books and many more pieces of jewelry, clothing, crafting supplies and unique items.
Unique Items
A full list of all unique items, including armor, weapons, clothing and jewelry.

Journey off the coast of Morrowind, to the island of Solstheim.
Encounter new towns, dungeons, and quests, as you traverse the ash wastes and glacial valleys of this new land. Become more powerful with shouts that bend the will of your enemies and even tame dragons. Your fate, and the fate of Solstheim, hangs in the balance as you face off against your deadliest adversary – the first Dragonborn.

Dragonborn takes place on the island of Solstheim, located north east of Skyrim. The geography of the island bears similar traits to both Vvardenfell and Skyrim and ranges from ash wastes to glacial valleys.[1]

The north is dominated by the arctic climate similar to that found in Winterhold Hold, while the south features the jagged landscape reminiscent of the Dunmer homeland.

Following the eruption of Red Mountain in 4E 5, thousands of Dunmer were forced to flee Morrowind. Many crossed over the border into Skyrim seeking refuge, and whilst they were accommodated, the Nords graciously offered them the island of Solstheim as their new home.[2]

The mining town of Raven Rock, located on the southern coast, is a far cry from its former days. After the mass Dunmer migration it has taken on a heavy Dunmer influence in its architecture and culture. House Redoran is an established presence as seen by their banners adorning the walls outside the settlement.

To the north the Skaal Village, Thirsk Mead Hall and the ruins of Castle Karstaag can be found in the icy tundras.

The primary antagonist in Dragonborn is Miraak, the mysterious former dragon priest who is revealed to be the first individual gifted with the dragon blood.

He ruled over Solstheim thousands of years ago at the behest of Dragons, much like his counterparts in Skyrim, however at some point this changed and he rebelled against the winged overlords.

In addition to the island of Solstheim, Dragonborn also involves venturing into the plane of Oblivion known as Apocrypha, domain of the Daedric Prince of forbidden knowledge, Hermaeus Mora. The realm appears as a large citadel-type building with twisted columns and is home to dangerous creatures, such as Seekers and Lurkers.

During the course of the add-on, new abilities and powers can be learnt in the realm from mysterious Black Books.

A preview trailer was released by Bethesda on 5th November 2012 that showed various aspects of the add-on.

He was once one of them, the Dragon Priest.
He ruled here in their name, ruled over Solstheim.
But he did not serve the Dragons, he devoured them.
And like them, he seeks to return.
You didn't think that you were the only one?
He was the first.
Dragonborn!

The trailer begins by showing a ship approaching an island later revealed to be Solstheim. Banners can be seen bearing the crest of House Redoran while the buildings in the background are distinctly Dunmer in origin. This is followed by some imagery relating to dragon priests, such as the Dragon Priest Shrine. Next the narrator is revealed as an elderly Nordic man sitting outside a Skaal village.

A few scenes of Solstheim are shown next, including its unique landscape, the Telvanni Tower and a mysterious cave inhabited by netchs. A Dunmer settlement displaying Redoran architecture and a Nordic tomb decorated with dragon skeletons, are also shown.

Next an amphitheatre-type structure is shown followed by a smaller structure and upright pillar emitting a green glow. The Dragonborn is then shown reading a book, after which a tentacle ensnares him. The next shot reveals a large citadel-type building with twisted columns as pages of books flutter in the wind.

The Dragonborn is then shown inside the Telvanni tower, using some type of levitation device to ascend into a laboratory of sorts, littered with Dwemer scraps. This is followed by a shot of two new armor types, one of which appears to be made of bone with a semi-translucent layer on top.

The trailer then shows the Dragonborn climbing on to the back of a new breed of dragon whilst in the citadel realm, followed by various scenes of combat pitting the Dragonborn against a variety of creatures, including spear wielding rieklings, some of whom are riding tusked bristleback war mounts. Several new types of armor and weapons are shown again. Finally the Dragonborn is seen riding a roaring dragon with High Hrothgar in the background.

The trailer concludes with a shot of three dragon souls being absorbed by the unnamed former dragon priest, who is purportedly the first Dragonborn. 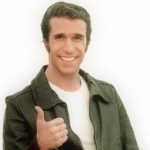 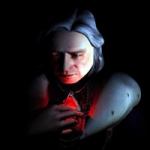 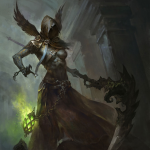