On 9 August 2015,[7] Todd Howard stated in an interview with DualShockers that The Elder Scrolls VI was not coming for a "very long time."[8]

At E3 2016, Todd Howard stated in an interview with Geoff Keighley, "Yes, of course we are [making Elder Scrolls 6]. It's something we love. But it is—I have to be careful what I say—it's a very long way off. […] it's something that's going to take a lot of time, what we have in mind for that game."[9] Howard also commented during the same E3 2016 interview, "We actually have two other large projects we're also doing that are bigger than anything we've done. People will probably hear about those even before Elder Scrolls VI."[9]

At E3 2017, Pete Hines stated in an interview that The Elder Scrolls VI was "down the road." He continued, "To reiterate, they have at least two major titles that they are working on before we're gonna get to Elder Scrolls VI. […] We're pretty clear, TES VI is not in dev."[12]

On 14 June 2018 at an interview with Rooster Teeth, Pete Hines stated that The Elder Scrolls VI will take place in Tamriel. He stated later in the interview that it would be released "longer than eventually," relative to Starfield being released "eventually."[5]

On 28 June 2018, Todd Howard stated in an interview at GameLab that the location of The Elder Scrolls VI had been decided upon "a while ago." When asked if it was possible to discern the location of the game from the teaser trailer shown at E3, Howard stated, "I obviously would say yes … You can rule some things out. And you can rule some things in. The first thing we do is the world so we've known for a while where it's set." [14]

On 8 October 2018 at an interview with Eurogamer, when asked about when fans would get more information about Starfield and The Elder Scrolls VI, Pete Hines stated, "A while from now and a really long while from now! Respectively. […] the timeframe for Bethesda Game Studios titles has not changed at all. […] Timeframe-wise, it would still be about as long as you'd expect when you look at Fallout 3 to Skyrim to Fallout 4 to Fallout 76. It's still going to be those periods of time, that hasn't changed. Or at least, I don't think it will change from that based on what I know." [15]

On 4 June 2019 in an interview with IGN, Todd Howard said about The Elder Scrolls VI, "I think everyone should be very patient [...] The gap in between is obviously going to be long, it already is. On one hand, I think it's good to miss things. I think that makes people come to it with really, really fresh eyes. And I think when they eventually see the game and what we have in mind, they'll understand the gap more in terms of technology and what we want it to do. The one thing it does is people are still playing Skyrim, it's still one of the best-selling games. I know people joke about it online, but it's one of the best-selling games on Switch. Anything we put it out on, it becomes a hit game. And they love it, they still play it, it's almost infinitely playable, all of the mods and everything like that. And we're 8 years post-Skyrim. It lets us know going into Elder Scrolls 6 this is a game we need to design for people to play for a decade at least, at least."[17]

On 10 May 2020, Pete Hines stated on Twitter in response to a fan request for information about that game, "It’s after Starfield, which you pretty much know nothing about. So if you’re coming at me for details now and not years from now, I’m failing to properly manage your expectations."[3]

On 21 September 2020, in an address regarding Microsoft's acquisition of ZeniMax Media, Todd Howard stated that advances in computing power in consoles like the Xbox Series X/S "led to our largest engine overhaul since Oblivion, with all new technologies powering our first new IP in 25 years, Starfield, as well as The Elder Scrolls VI."[18]

On 13 June 2021, in an interview with The Washington Post, Todd Howard stated, "We took a good decade on ‘Fallout’, looking, listening to lots of takes and pitches. I think it’s about finding the right creative team. A lot of people want to do ‘The Elder Scrolls’ as well, but that’s not something we’re doing right now."[2]

On 29 June 2021, in an interview with The Telegraph, Todd Howard stated, "The technology, Creation Engine 2, is sort of built for both [Starfield and TES VI]. It’s like a new tech base. The vast majority of our development development work is on Starfield right now but everybody works on everything so the projects kind of intertwine. It’s good to think of The Elder Scrolls 6 as still being in a design [phase]… but we’re checking the tech: 'Is this going to handle the things we want to do in that game?' Every game will have some new suites of technology so Elder Scrolls 6 will have some additions on to Creation Engine 2 that that game is going to require."[1][19]

On 9 November 2021, in an interview with IGN, Todd Howard stated, "'Would you plan to have the kind of gap we're having between Skyrim and the follow-up?' I can't say that's a good thing. I wish I could wave a wand and the game that we want to make and we have in our head and we're starting things on just came out—absolutely. But there's other things we want to do. […] I'd like to find a way to accelerate what we do, but I can't really say today, or commit to anything, what's going to happen other than, 'Hey, our cadence is Starfield, then Elder Scrolls VI.' […] We're focused on one [game] at a time. Pre-production, for me, I like it to be two years. So you might have a small group on it and do something and say, 'Let's pause. Let's come back.' When we're really going full-bore, where most of the studio's on something, that could be anywhere from 12 months to 24 months. […] There's more overlap than, 'Do a game, stop, do a game….'" Asked about the technological leap between Skyrim and The Elder Scrolls VI, Howard said, "It's probably our biggest ever [jump]. […] We could really take advantage of the new systems: redoing the renderer and the basic underlying guts of the engine itself. […] Whenever you do an engine overhaul… we're still making data. We're still doing a lot of art and design and levels and spaces and things like that, and the engine is changing, and figuring out when those sync up is one of the great challenges that all developers deal with." [20] 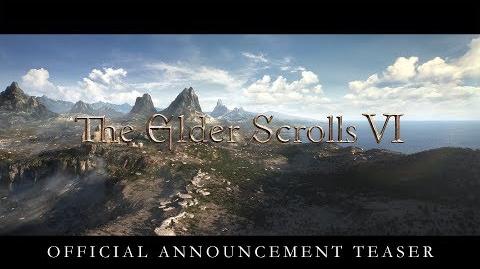 A behind the scenes look at photogrammetry technology in TES VI.

Shirley Curry being added to the game as an NPC using photogrammetry.

Беларуская Deutsch Français Italiano Polski Русский Українська
*Disclosure: Some of the links above are affiliate links, meaning, at no additional cost to you, Fandom will earn a commission if you click through and make a purchase. Community content is available under CC-BY-SA unless otherwise noted.
Advertisement