View source
watch 02:30
Dead Cells Final DLC - The Loop
Do you like this video?
Play Sound

First Era
Second Era
Fourth Era
The Greybeards are an ancient and honored order that dwell in their mountain sanctuary High Hrothgar, which is located on the highest mountain peak in Tamriel, the Throat of the World. As masters of Thu'um, or "the Voice," they live in absolute silence in order to better attune themselves to the voice of the sky. They are a peaceful order, not using their Thu'um to augment their martial skills, but to worship and honor the gods, as the "Way of the Voice" decreed.

When the Greybeards speak, storms brew above High Hrothgar, and people are forced to evacuate due to the imminent danger of avalanches. When they even so much as whisper the word "Dovahkiin," it rumbles through the world, and the mountains shake. Such is their power, the last time that they spoke was when they announced the greatness of Tiber Septim.[1]

"An order of philosopher monks who are masters of the Way of the Voice, the Greybeards live in silent isolation atop Skyrim’s largest mountain."
―Loading screens[src]

The Greybeards were founded by a powerful Tongue, Jurgen Windcaller, in the First Era. After he suffered a disastrous defeat at Red Mountain, where his army was annihilated, he spent seven years pondering the meaning of his defeat.[2][3] He finally concluded that the gods had punished the Nords for their arrogant and blasphemous misuse of the Thu'um.

Following this revelation, Jurgen developed a pacifist creed called the "Way of the Voice" that thought that the Thu'um should only be used for the worship and glory of the gods, rather than military exploits.[4][5] He built High Hrothgar, located near the peak of the Throat of the World in Skyrim, which served as the monastery where he and his disciples meditated and perfected their voice.[2][5]

It is unclear exactly when in the First Era that the Greybeards were formed, as the exact time of Jurgen Windcaller's seven-year meditation is not known. It occurred after a momentous defeat at Red Mountain, and the most well-known defeat of the Nordic forces at Red Mountain was the Battle of Red Mountain, circa 1E 700. However, the Nords had been driven out of Morrowind hundreds of years earlier, around 1E 416, and the Five Songs of King Wulfharth suggests that the Greybeards were already in existence before Wulfharth's first death in 1E 533.

During the Second Era the Greybeards were silent for years until they spoke a name; Tiber Septim, who was called to High Hrothgar to be blessed and named Dovahkiin.[2] It was also during this time that Tiber Septim learned that he was destined to become Emperor of Tamriel.[6]

By the Fourth Era, there are only five members of the Greybeards. Four of the monks live in High Hrothgar. Their grandmaster, Paarthurnax, resides higher up on the Throat of the World in constant meditation. The leader of the Stormcloak rebellion, Ulfric Stormcloak, was once a student, learning the ways of the Thu'um.

The Greybeards are featured prominently in the main questline. When the quest "Dragon Rising" is completed, they call out for the Dragonborn, summoning them so that they may meet and test them. They also help the Dragonborn understand the unique power they wield. They do meet and test the Dovahkiin, then they give some training. Upon arrival, the Dovahkiin must prove they are Dragonborn by demonstrating the power of the Thu'um. They teach a couple of shouts and then, for the final test, they send the Dragonborn on a quest to retrieve the Horn of Jurgen Windcaller.

Arngeir will reveal the locations of Word Walls throughout Skyrim to the Dovahkiin if they favor the Greybeards, as opposed to the Blades. He mentions how the Dragonborn arrives, at this certain moment in time, at the turning of the age. If asked if it is a coincidence that they were brought here at the time of the dragons returning, he states that it is not a coincidence.

Upon attacking a member of the Greybeards, they respond with the Ice Form shout to paralyze the attacker, as well as utilizing a plethora of other shouts and spells. Unsuccessful pickpocket attempts cause them to attack as well.

The Greybeards do not wield weapons and may engage in unarmed combat when foes reach melee range. Weapons dropped near the Greybeards may be picked up and used by them.

Flagged as essential, it is only possible to reduce their health to a low level. After this, they crouch down until their health regenerates and resume battle with their attacker. Knocking a Greybeard off the mountain using Unrelenting Force or Vampiric Grip will result in them respawning in the monastery or courtyard in a short time.

If a dragon appears near High Hrothgar, a Greybeard may attack it only if they are outside. Should this occur, other Greybeards emerge from High Hrothgar to assist in the battle.

The Greybeards will also initiate combat with the Dragonborn or follower if they are caught stealing in High Hrothgar. 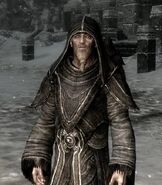 Arngeir, one of the Greybeards elders and their de facto leader, for the others cannot safely speak to the Dragonborn.

Borri, one of the Greybeard Elders.

Wulfgar, one of the Greybeards Elders.

Einarth, one of the Greybeards Elders.