The Pawned Prawn is a general store in The Elder Scrolls V: Skyrim located in Riften. It is owned by Bersi Honey-Hand and his wife Drifa. It is one of the locations involved with the Thieves Guild quest "Taking Care of Business." The store operates from 8 AM to 8 PM with a half-hour variance.

As with other general goods stores, the merchandise available at The Pawned Prawn improves proportional to the Dragonborn's level. Example: 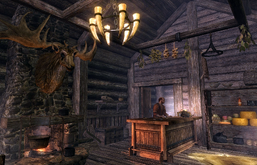 The Pawned Prawn Main
Add a photo to this gallery

Start a Discussion Discussions about The Pawned Prawn