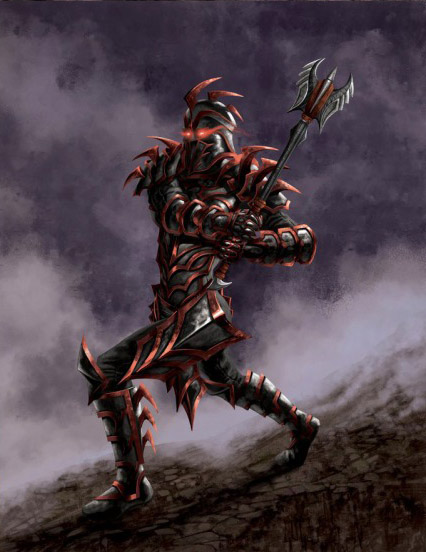 Hooks of metal sprout from the gorget to the sabaton of a Daedric fighter, always the red of fiendish ferocity.

I was instructed to remain a trifle lackadaisical about my personal hatred of the Daedra, as the recent and open veneration of the Daedra lords in the lands of Cyrodiil by the aristocracy has created quite the rift. But look where this appeasement has gotten us. Now this rift has turned into a yawning chasm, the dead have risen to dance for the worm cult priests, and Molag Bal's talons anchor the now-forlorn countryside. I cannot silence my thoughts. The forces of the Daedra must be slain at all costs.

Be certain to search out the beast that hides behind this armor of red and black, a cruel set of barbed implements to slice and gouge at his or her side. Fear the malice of these ebony axes or swords designed to inflict suffering before death, daubed in crimson ore, a metal cast in otherworldly forges and often augmented in the hilt or pommel with a volcanic gem, always red as blood. There is devilry in this heraldry; mocking and fanged faces peer out from shields and shoulder plates, effigies of false gods or those that lurk beyond our realm. While the worm cultist raises his dead in tarred and tattered robes, hooks of metal sprout from the gorges to the sabaton of a Daedric fighter, always the red of fiendish ferocity. Only the eyes show behind this wall of obscene metal. Only the eyes. 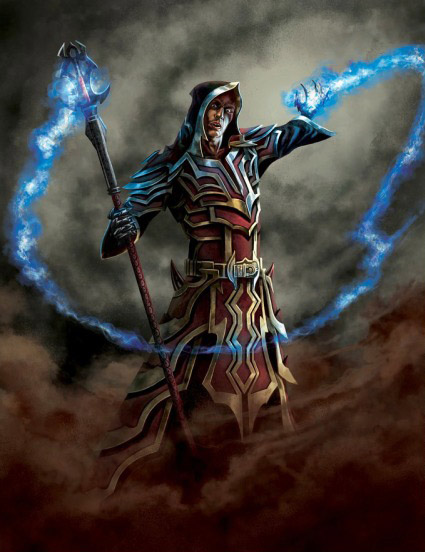 The Forces of Daedra must be slain at all costs

Retrieved from "https://elderscrolls.fandom.com/wiki/The_Pestilence_of_the_Daedra_and_the_Worm_Cultist?oldid=2763235"
*Disclosure: Some of the links above are affiliate links, meaning, at no additional cost to you, Fandom will earn a commission if you click through and make a purchase. Community content is available under CC-BY-SA unless otherwise noted.