For other uses, see Thief.

"Those born under the sign of the Thief are not typically thieves, though they take risks more often and only rarely come to harm. They will run out of luck eventually, however, and rarely live as long as those born under other signs."
―The Firmament[src]

The Thief is one of thirteen birthsigns existing in the Aurbis. It is a guardian constellation with The Lover, The Shadow, and The Tower as its charges. Its season is Evening Star.[1]

During the events of The Elder Scrolls Adventures: Redguard, Cyrus encountered a young Redguard male named Coyle who recited a verse about The Thief: "Clever Thief watches... Lover sighting... Shadow lying... Tow'r defying... Through the night." The exact origin of the verse is unknown but it is accompanied by others, each pertaining to the other guardian constellations, and is used as a mnemonic device.[2][source?] 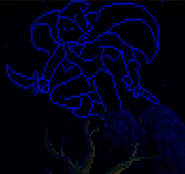 The constellation in The Elder Scrolls Adventures: Redguard.