"Each event is preceded by Prophecy. But without the hero, there is no Event."
―Zurin Arctus/the Underking[src]

The Underking is the name given to the undead form of either Zurin Arctus,[1] the Imperial Battlemage of Emperor Tiber Septim, after his betrayal near the end of the Second Era; or Ysmir Wulfharth, an ancient King of Skyrim who has lived many lives and was also betrayed by Tiber Septim.[2] Zurin Arctus, as the Underking, is associated with Magnus.[3] The Underking also hid the Ring of Khajiit in a dark abyss in an unspecified time period.[4]

A possibly mythical entity who has been the subject of horror stories for hundreds of years. A group of mages and undead creatures wander the land, claiming to be Agents of the Underking.[5]

Zurin Arctus was the Imperial Battlemage during the time of Tiber Septim,[6][2] as well as a tactician, who authored a book on War Magic.[7] Zurin Arctus also performed major research on the Numidium following its capture as a result of the Armistice with Morrowind, discovering the reasoning as to why the Numidium was made, and its potential. He also learns the role of Ysmir Wulfharth in the War. However, Arctus was convinced he needed the Heart of Lorkhan to fuel the Numidium, and was, as such, working on incomplete plans.[2] Arctus was also the person responsible for the creation of the Totem of Tiber Septim, which was crafted at the order of the Emperor himself, and which was required to control the Numidium. In order to ensure that only those of Tiber Septim's bloodline could access the Numidium, Arctus placed a seal on it, disabling everyone from using the Numidium unless they were of Tiber Septim's line, or possessed a special supernatural affinity. Those who would try to use the Numidium without the requirements of the Totem, would be killed.[8]

After Wulfharth was ambushed, Zurin Arctus, the Imperial Guard, and Wulfharth himself were all killed, after which Tiber Septim strolled in and took the Mantella, believed to be the heart of the Imperial battlemage.[2][9] Others state that the Mantella was infused with the life force of the Imperial Battlemage, and that with the power of the artifact, Septim crushed all those who stood in his way. [8] Others state that Tiber Septim betrayed Zurin Arctus, and that when the Battlemage died, his soul refused to leave his body, resulting in him turning into the undead Underking.[10]

After Summerset Isle was conquered,[11] Tiber Septim started using the Numidium to crush neutral royal families in Tamriel, and replace them with those more loyal to himself. Zurin Arctus became furious at this use of the Numidium, fought to reclaim the Mantella. In the process, both the Numidium and the Battlemage were destroyed, with the Mantella being blown into Aetherius, and the Numidium's body being scattered and falling into the sea.[11] Following this, Zurin Arctus became the Underking, with his agents being dedicated to find the Mantella.[8] Even so, there remains uncertainty as to whether or not the Mantella was the heart of Tiber Septim or the heart of the battlemage.[2]

When Zurin Arctus had arisen not long afterwards, he took his first revenge against Tiber Septim by cursing the holy catacombs of Sancre Tor.[1] Tiber Septim sent out the four mightiest of his Blades to investigate the scene, Rielus, Valdimar, Alain and Casnar.[12] When the Blades arrived, the Underking defeated them and ensnared them within Sancre Tor, cursing them to roam the catacombs as skeletons, binding them to forever guard the defiled shrine of Tiber Septim.[13][1] Since then, the Underking has been recovering in a crypt within High Rock.[11]

During the Imperial Simulacrum, it was said that the Underking held a Necromancer agent known as Golthog at Stonekeep.[14]

Prior to the Warp in the West, the Underking had been a torn in the side of Mannimarco for centuries.[10] When the Necromancers tried to trick the Blades by providing them with a cursed artifact, the Underking sent out his agents to contact the Agent of the Emperor, in an attempt to retrieve the cursed artifact.[15] The kidnapping of Prince Arthago of Sentinel was also often attributed to the Underking,[16][17] a claim which the Underking's agents tried to disprove.[18]

During the Warp in the West, the Underking's spy network was said to have been very extensive.[19] At the end of the Warp in the West the Underking obtained the Mantella and used it to reunite himself with his heart, finding peace after countless years of being undead.[6] In the process, he created an anti-magic zone of several miles radius around that area. When the Bay Kings or Gortwog obtained the Numidium, the Underking destroyed it after their usage.[11]

During the Oblivion Crisis, the Underking's curse over Sancre Tor was also lifted by the Hero of Kvatch. The Hero slew the undead Blades, and the four Blades combined were able to lift the curse. With the curse gone, the Hero retrieved the Armor of Tiber Septim from Sancre Tor.[13]

Other accounts attribute Ysmir Wulfharth as the Underking. During the Second Era, the Underking was called upon by Almalexia to fend off the Akaviri Invasions of the Kamal,[20][21] though other accounts attribute the Greybeards for having summoned him from Sovngarde.[22][23] Following the invasion, he was said to have disappeared for some three hundred years,[2] with some sources stating he returned to Sovngarde.[23]

The Underking would be awakened by the summoning of the Greybeards, who stated that someone would create a new Empire, defeating the elves to form a united Tamriel. Wulfharth believed he was the one, and so met with the Greybeards. Upon arrival, however, when the Greybeards spoke to Wulfharth, he was blasted to ash, proving that Wulfharth was not the one the prophecy foretold.[2]

When Tiber Septim was crowned the Emperor of Cyrodiil, Wulfharth was tasked with the Imperial expansion into Skyrim. He would later also propose a full invasion of Hammerfell, but be turned down by the Emperor personally, who instead chooses to intervene in a civil war in order to legitimize his claim to Hammerfell. At the same time, Wulfharth pressed on Tiber Septim the need to invade and conquer Morrowind, out of both a desire of vengeance and the prophecy of the Greybeards. Morrowind was shortly after invaded due to a need for ebony, but when the Armistice was signed, Ysmir became furious and abandoned Tiber Septim.[2]

Following the research performed by Zurin Arctus on the Numidium, Tiber Septim contacted Wulfharth once more. The Emperor claimed that Wulfharth was right all along, and that the Tribunal should have been slain, and that he needs his help to create a plan to do so. Wulfharth accepts, but when he arrives he is ambushed by Imperial guards. In the chaos, Zurin Arctus is said to have used a soulgem on him. In his dying breath, Wulfharth's heart roared a hole through Arctus' chest, resulting in everyone presenting being killed and turned into ash, with Tiber Septim strolling in to take the soul gem, which would be known as the Mantella. Fueled by the power of the Underking, Tiber Septim is able to use the Numidium to end the war.[2]

After Summerset Isle was conquered, the Underking appears, destroying the Numidium, and the Mantella falling into the sea. Even so, there remains uncertainty as to whether or not the Mantella was the heart of Tiber Septim or the heart of the battlemage.[2] 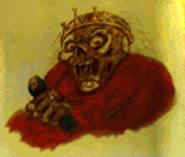 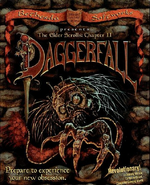 The cover art for Daggerfall featuring The Underking 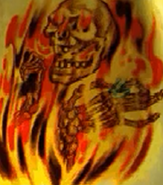 The Underking's death
Add a photo to this gallery

Retrieved from "https://elderscrolls.fandom.com/wiki/The_Underking?oldid=3129103"
*Disclosure: Some of the links above are affiliate links, meaning, at no additional cost to you, Fandom will earn a commission if you click through and make a purchase. Community content is available under CC-BY-SA unless otherwise noted.