For other uses, see Warrior.

"Those born under the sign of the Warrior are skilled with weapons of all kinds, but prone to short tempers."
―The Firmament[src]

The Warrior is the first Guardian Constellation. His charges, The Lady, The Steed and the Lord are under his protection. His own season is the Last Seed.[1] The Warrior constellation contains the Planet Akatosh, which is sometimes called the Eye of the Warrior.[2] 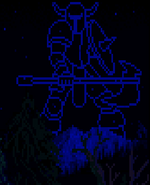 The Warrior as seen in The Elder Scrolls: Arena.

The Warrior as seen in The Elder Scrolls Adventures: Redguard.