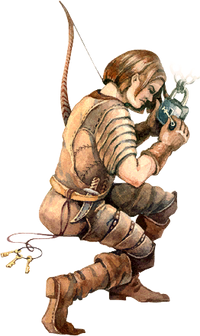 For other uses, see Thief.

"Profiting from the losses of others is their love. Able to be swift in shadow, and crafty in bartering. Locks are enemies, and lock-picks are their swords."
―In-game description[src]

The Thief is a premade class. Thieves are quick, agile and cunning. They are especially adept in bows and daggers to surprise an enemy from stealth or scout, or to deliver critical hits. Thieves typically develop skills more quickly than other character classes.

To maintain their nimbleness and stealth, thieves typically utilize Light Armor, and use light shields. They are especially adept at using light weight weapons as the dagger, short sword, broadsword, sabre, war axe, and short bow. Due to this, a Thief is capable of switching to warrior or weak mage in higher levels.

The Thief is the archetypal Stealth character, being adept in all seven stealth skills. This naturally makes them great at subterfuge and burglary. On the downside, they are less able in martial or arcane areas, lacking any innate Combat or Magic skills.

Sneak is a core thief skill. When plying their shady trade in towns and cities, sneaking lets thieves avoid the attention of guards and house owners, as well as offering opportunities to pick a few pockets. When out adventuring, a sneaky thief can avoid dangerous enemies or deliver powerful Marksman sneak attacks. Security allows the thief to bypass locked doors, or to pilfer dungeon chests full of valuable loot right under the noses of their guardians.

Sneaky in social skills too, Mercantile comes in handy when a thief is selling off their (possibly ill-gotten) gains. Speechcraft helps butter up merchants to get even better prices, but perhaps more importantly is also key to resolving some quests without confrontation.

Marksman is the only offensive skill that the thief has. Fortunately it works well with their other skills; Acrobatics is great for getting to safe sniping perches, Sneak provides a damage boost against unaware enemies, and Light Armor provides some protection without slowing the thief down too much. Thieves prefer to fight using ambushes and evasion, placing guile above brawn. A thief is fast, agile, and highly mobile, and can make effective long range attacks with bows. However, they can find themselves in trouble if they let themselves get cornered by powerful melee opponents.

Retrieved from "https://elderscrolls.fandom.com/wiki/Thief_(Class)?oldid=3068705"
*Disclosure: Some of the links above are affiliate links, meaning, at no additional cost to you, Fandom will earn a commission if you click through and make a purchase. Community content is available under CC-BY-SA unless otherwise noted.