Epic
''Summon:' See a vision of two of your opponent's cards. Guess which one is in their hand. If you're right, draw a copy of it.'

Thief of Dreams is a creature card in The Elder Scrolls: Legends that is a part of the Heroes of Skyrim expansion.

Thief of Dreams can be purchased as part of the Brynjolf's Heist deck or purchased alone for 400 soul gems.

Thief of Dreams is a very powerful card, not only are its health and damage stats high, but its ability can give you an opponent's card. The strategy behind this card varies heavily on the card that is drawn by Thief Of Dream's power. 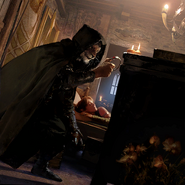 Retrieved from "https://elderscrolls.fandom.com/wiki/Thief_of_Dreams?oldid=2992292"
*Disclosure: Some of the links above are affiliate links, meaning, at no additional cost to you, Fandom will earn a commission if you click through and make a purchase. Community content is available under CC-BY-SA unless otherwise noted.