For other uses, see Thieves Guild.

"Our access to those bits of luck are what separates us from common bandits."
―Gallus Desidenius[src]

The Thieves Guild is an organization of professional thieves based in Skyrim that provides mutual support for the illegal endeavors of its members and their clients. It is one of several factions that the Dragonborn can join in The Elder Scrolls V: Skyrim.

Based in Skyrim and headquartered in The Ratway beneath the city of Riften, members of the Thieves Guild are renowned for causing trouble in the city and are held largely responsible for the corruption of the city's markets. Members of the guild specialize in stealing objects of varying value or loaning septims to potential entrepreneurs or to help someone pay off their debts, in hopes of a payback. Most citizens view them unfavorably; Mjoll the Lioness has made it her duty to maintain order in Riften and pledges to dismantle the guild. Maven Black-Briar, the affluent and unscrupulous owner of the popular Black-Briar Meadery, consorts with the guild in exchange for their financial aid and protection. The guild has an uncanny luck due to certain members striking up a deal with the Daedric Prince, Nocturnal, to serve as guardians to her temple.

The guild has a strong hold in politics and law enforcement due to their ability to bribe, intimidate and extort the officials and guards of any hold by exploiting their greed or by threatening to reveal embarrassing and potentially damning secrets to the public.

Little is known about when and how the Thieves Guild of Skyrim was founded, but it is rumored to have been around as long as Riften has.[1] As the Fourth Era continued, the Thieves Guild slipped further and further into obscurity and the members and regular clients began to leave (with the exception of Maven Black-Briar).[1][2][3][4][5]

The guild was previously believed to be completely fictional; in Oblivion, if asked about the guild, guards would simply state that there was no such thing. However, the Thieves Guild has become well known and, in fact, well renowned for their thievery and exploitation.[6]

The guild has some close association with the Dark Brotherhood which becomes apparent in "The Silence Has Been Broken" quest for the Dark Brotherhood, in which the Dragonborn must bring an amulet given by Amaund Motierre to Delvin Mallory, a member of the Thieves Guild.

In 4E 176, which is twenty-five years before 4E 201,[7] when the quests of the Thieves Guild in Skyrim take place, the Thieves Guild was in a golden age. Their headquarters was a palace, in which they had their own blacksmith, alchemist, traders, fences, and many associates throughout Skyrim. The Thieves Guild was very powerful and dominant and was feared and respected by most of Skyrim.[4] Even with the Guild being in a Golden Age, the Guildmaster Gallus Desidenius was slowly and carefully organizing and planning long-term heists which included heists on museums, art galleries, stores, and government treasuries in an effort to continue and strengthen the Guild's presence in Skyrim. One of these heists included the heist of the Eyes of the Falmer, which required a deep understanding of the Falmer, their language, and their writing system.[8]

By 4E 201, the Guild was on the brink of collapse, with the people of Skyrim becoming bolder and less fearful of the organization. The Guild had made plans to bring itself back to its former glory and establish itself as a major faction in Skyrim. A great number of small jobs were needed to be completed; this was followed by the completion of a contract by a notable person found in Whiterun, Solitude, Windhelm and Markarth. A special request was not needed to be completed in Riften, because the Thieves Guild already had a major presence in the city and was preeminently dominant throughout the area.

When the first group of Nightingales sought guidance from Nocturnal, she accepted, but in return, the Guild would have to keep the Skeleton Key safe in its chamber. However, when Mercer Frey secretly assassinated the current Guildmaster Gallus and took the key from its chamber, the Guild lost Nocturnal's favor. The curse was then activated, causing the Guild to go to a state of decay and ill-repute among their clients.

One of the major aspects of the Thieves Guild in Skyrim is their use of a code the guild-members use to communicate with each other without speaking. This unique code is known as Shadowmarks. The code is composed of nine different symbols, each with their own meaning. These Shadowmarks are commonly placed on door-frames on the fronts of buildings which indicate to a Guild member if the building is safe, dangerous, contains important items or loot, houses another member of the Guild or another thief, as well as other important uses that could help a Guild member or other thieves.[9]

Escape Route Shadowmark
Add a photo to this gallery

Brynjolf, when encountered during the daytime, will give the Dragonborn instructions to steal Madesi's Silver Ring from the strongbox located under his stall and then plant it inside of the pocket of Brand-Shei, the local general stall owner. He is identified as the only male Dunmer in the crowd. Brynjolf will start a distraction by calling everybody within the area to listen to the story of his latest product that he is selling, which is obviously a ruse. During this time, carry out the plan as discussed with Brynjolf. Planting the ring will instantly end Brynjolf's tale he is telling to the crowd thus dispersing it. He will now tell the Dragonborn to meet him in the Ragged Flagon down in the Ratway to discuss membership.

Even if the Dragonborn fails to acquire the ring, joining the Guild is still possible because Brynjolf says he still believes the Dragonborn has what it takes, despite failure of the quest. However, it will initially make a few members of the guild treat the Dragonborn with more disdain.

Delvin and Vex offer an unlimited number of radiant quests known as "jobs." The target item and location for each are generated randomly within Whiterun, Markarth, Windhelm, Solitude and Riften. Jobs can be accepted and denied at will. It is possible (and efficient) to run a job for Delvin and one for Vex simultaneously (the Tips section below has more information). The reward for each mission is leveled, between 50 and 800

. After performing five small jobs in a single city, excluding Riften, a special job will be unlocked for it. Killing those crucial to the job results in a failure, and no payment is received. Since there are no count statistics provided for these jobs, the only ways to determine how many have been done are to go through the completed jobs in the quest log and read the objective for each, since they list the city in which the job was done, or to keep track manually.

With The Elder Scrolls V: Dragonborn installed, jobs such as "The Bedlam Job" can also be generated in Raven Rock on Solstheim, although there are no special jobs nor city influence quests on the island.

After completing five small jobs in a city (with the exception of Riften and Raven Rock), Delvin will offer a special job to restore Thieves Guild influence in that city. These quests can be taken in any order. The city influence quests are necessary in order to complete "Under New Management" and assume the title of Guildmaster. When they are all completed, the guild can return to its former glory. (However, before completing them all, see the bugs reported for "Under New Management.") Becoming Guildmaster allows access to the Guild Master's Tribute Chest.

Each city influence quest that is completed will add a merchant stall to the Ragged Flagon. In addition, the gold available to fences throughout Skyrim gradually increases as these quests are completed, up to a maximum of 4,000

. The third and fourth city influence quests will each add a new recruit to the Guild as well: first Garthar, and then Ravyn Imyan.

While related, "Deliver Moon Sugar to Ri'saad" is not itself a city influence quest. It is given by Tonilia rather than Delvin Mallory, and is not a prerequisite for "Under New Management."

Although these unlocked merchants work for the guild, they do not act as fences and therefore do not buy goods marked as stolen. (Note: If the Windhelm quest is completed before all others, Herluin Lothaire may move instead of Syndus.)

The fastest possible method for completion is to disable automatic saves (on Travel, on Character Menu), take Numbers jobs from Delvin and take Burglary jobs from Vex. These are the two fastest respective job types to complete. Once one has factored in time lost from repeated saving and reloading the latter tip actually takes longer than speedrunning.

Alternatively, one can save before getting a new job, then ask for "Bedlam Jobs" from Delvin and "Sweep Jobs" from Vex (Hint: to avoid going through the conversation again, it is best to save once the dialogue is finished, but before the quest objective appears). As long as they are in the same city, once the Sweep Job is done, "The Bedlam Job" will be completed as well, essentially completing two tasks at once. If it is in a city whose influence quest has already been completed, quick loading and trying again is suggested.

Another way is to quit the job Delvin and/or Vex assigned, then ask for the job again. Generally, there are no negative repercussions for quitting jobs, excluding the multiple failed missions in the quest log and the short disapproving dialogue after each quit job. However, if the Dragonborn quits a "Sweep Job" in one place and then gets that job again later, they risk having difficulties stealing the items since the new/latest rendered item could spawn inside the old item that is left from the first job. For example, the Dragonborn could get a jeweled pitcher inside another jeweled pitcher. On PC this can be resolved by using the console and simply disable the outer/old item from the previously quit job.

It is also very helpful to keep track of how many jobs have been done in each of the four holds that matter (Whiterun, Haafingar, Eastmarch, and the Reach). This makes it easier to choose the jobs to be kept or dumped to keep the relative numbers balanced. For example, if jobs are done in three holds, and yet all five jobs are left to do in the other hold, then it can be tedious to wait to be given jobs in that hold.

On PC, it is also possible to avoid doing the jobs altogether as city influence quests can be started using the setstage console command. Each quest can be started by using the appropriate quest ID and setting the stage to 10.

Various unique items can be stolen during the Thieves Guild quests and sold to Delvin. As each is collected and sold to Delvin, they will be displayed on the shelves behind Mercer's Desk where they can freely be taken or left as decoration. By following the quest line, the items appear in the following order:

Trophies also appear for completing a certain number of jobs assigned by Vex and Delvin:

Finally, the Crown of Barenziah is placed on the bust between shelves upon completion of the mission "No Stone Unturned."

Fences buy stolen goods. There are a total of nine different fences throughout Skyrim, including each Khajiit caravan: 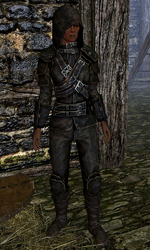 Expulsion from the guild[edit | edit source]

Thieves caught attacking other guild members or one of their associates are removed from the guild and none of the members speak to them. To rejoin the guild, speak to Vex, who will charge a fee of 1000

Retrieved from "https://elderscrolls.fandom.com/wiki/Thieves_Guild_(Skyrim)?oldid=3090573"
*Disclosure: Some of the links above are affiliate links, meaning, at no additional cost to you, Fandom will earn a commission if you click through and make a purchase. Community content is available under CC-BY-SA unless otherwise noted.