"I know Thieves' Guild armor when I see it, you're not fooling anybody..."
―Hold Guards[src]

Thieves Guild Armor is a light armor set found in The Elder Scrolls V: Skyrim. The armor is mostly made of leather and is lightweight, making it ideal for the agile shadow-hugging thief. It offers higher defense than Elven or Scaled Armor and is available extremely early in the game after 2 non combat quests. Incidentally, the armor cannot be disenchanted. Upgraded with Leather, the Thieves Guild Armor fortifies lockpicking, pickpocket, and carrying capacity when worn. Pieces can only be found within the Ragged Flagon - Cistern. Random encounter thieves wear this armor, however it cannot be taken from them.

Upon completing "Scoundrel's Folly" without killing Gulum-Ei, the opportunity to upgrade one piece of the armor is provided. The stat increases include:

After the quest "Under New Management," you are given a superior set called the Guild Master's Armor. This set includes improved bonuses for all pieces of armor. 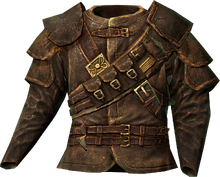 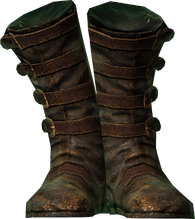 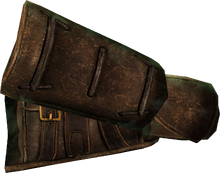 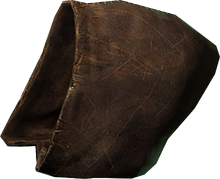 Retrieved from "https://elderscrolls.fandom.com/wiki/Thieves_Guild_Armor?oldid=2946766"
*Disclosure: Some of the links above are affiliate links, meaning, at no additional cost to you, Fandom will earn a commission if you click through and make a purchase. Community content is available under CC-BY-SA unless otherwise noted.