Not to be confused with Tribunal or Vivec, Temple Canton.

The Tribunal Temple, commonly referred to simply as The Temple,[1] is dedicated to the worship of the three god-kings of Morrowind known as the Tribunal. The Tribunal is composed of the goddess Almalexia, the god-poet Vivec, and Sotha Sil. The three gained their divine power through their use of Kagrenac's tools upon the Heart of Lorkhan, ultimately becoming the patron gods of the Dunmer people. It was the dominant religion in the province of Morrowind, until after the events of the game The Elder Scrolls III: Morrowind, where it was superseded by the New Temple.

The Tribunal Temple worships the three living gods: Almalexia, Sotha Sil, and Vivec, also known as ALMSIVI.[3] Each god was a patron of different things for Dunmer people. Almalexia was a patron of teachers and healers,[4] Vivec was a patron of artists and rogues,[5] and Sotha Sil was a patron of artificers and wizards.[6] According to Temple doctrine the three tribunes gained their divine power through superhuman discipline and virtue, and supernatural wisdom and insight.[7] Some Tribunal Temple cities are Necrom,[8] Almalexia, Clockwork City, Mournhold, and Vivec City. The Tribunal saved the Dunmer from numerous disasters, such as when Baar Dau was flung from the sky by Sheogorath[9] and was stopped by Vivec from landing on Vivec City or when Almalexia and Sotha Sil banished Mehrunes Dagon back to Oblivion after he destroyed Mournhold.[10] By doing these things, the Tribunal eventually gained the trust of the Dunmer people.

The upkeep of family tombs is often discouraged by the temple as most deceased Dunmer are either taken to the necropolis of Necrom or to the Great Ghostfence to maintain the structure. Many dead temple warriors and great house members are taken from battlefields to the ghostfence for this purpose.[11] Still, old family tombs have temple shrines and frescoes depicting the Tribunal and the temple saints.[12]

The House of Troubles[edit | edit source]

According to the temple the four Daedra that rebelled against the divinity of the Tribunal were Malacath, Mehrunes Dagon, Molag Bal, and Sheogorath. They are considered holy as they test the Dunmer people for weaknesses but are considered enemies to the people. Malacath tests the Dunmer for physical weaknesses, Molag Bal tries to upset the bloodlines of the houses and tries to weaken the Dunmer gene pool, Sheogorath tests the people for mental weaknesses, and Mehrunes Dagon tests the Dunmer will to survive and persevere. The worship of these Daedra is forbidden by the temple and often Imperial soldiers and Ordinators will hunt down anyone who worships them.[13]

As the protectors of the Dunmer people, the Tribunal have faced and defeated many dangers to protect their people.

In the Koal Cave Vivec fought an incarnation of the Daedric Prince Molag Bal known as the Ruddy Man.[9] In the fight between Vivec and the Ruddy Man, Vivec defeated him but spared him. With the exception that the Dunmer people were given his permission to use the hides of the Ruddy Man's worshipers, the Dreugh, to make armor. The battle was said to be so great that it was said to have created the West Gash.[14] The Ruddy Man then attacked outside the city of Tear. It was there that Vivec fought and defeated him again.[14]

At the city of Maar Gan, Vivec fought Mehrunes Dagon after he tried to attack the citizens of the city. Mehrunes tried to throw a giant rock at the city, but Vivec taunted him so that he would throw the rock at him instead. Where this rock fell, the people of Maar Gan built a shrine to the Tribunal.[15] It is said that during this battle, Vivec gave his silver sword to Lord Dagon, as he thought it would be dishonorable to fight an unarmed enemy.[9]

Sometime around the beginning of the Tribunal's godhood. The Daedric Prince Sheogorath rebelled against the Tribunal for mocking the Daedra and sent the large meteor, Baar Dau, to destroy the then-new city of Vivec.[9] After seeing the meteor, Vivec just raised his hand and the moonlet froze above the city. Vivec decided to keep it above his city to show that faith should be kept in the Tribunal as it was faith that kept Baar Dau afloat.[16]

When the Daedric Prince Mehrunes Dagon massacred the populace of Mournhold, Almalexia and Sotha Sil, with their combined god-like powers, managed to banish the prince back to Oblivion.[17] In the aftermath of this event Almalexia decided to stay in Mournhold[10], there, a large statue was erected in the city to commemorate Almalexia's part in the battle.[18]

The defeat of the Kamal invasion force[edit | edit source]

The assassination of the last members of the Reman Dynasty and their Tsaesci advisors who took over the reins of power after their deaths, Versidue-Shaie and Savirien-Chorak, brought the Reman Empire's reign over the continent of Tamriel to an end. For many more centuries, Morrowind managed to rebuild from its defeat in the Four Score War under the three Tribunes and the rest of the Tribunal Temple's guidance. However, this new peace and prosperity was interrupted by an invasion by the Kamal, a race that inhabited the continent of Akavir and were known as the Snow Demons of Kamal, led by their king and general Ada'Soom Dir-Kamal. The Kamal forces managed to initially defeat the Dunmer forces under the command of the Tribunal, and they advanced southwards through the province of Vvardenfell, a large island in the heart of Morrowind separated by the Inner Sea, and assaulted Vivec City, Vivec's seat of power. Under the guidance of Almalexia and Vivec, the Dunmer inhabitants of Vivec City were taught how to breathe under water. Then, the Tribunal struck a devastating blow to the Kamal forces by flooding the land around Vivec City, drowning the majority of their forces under the water. However, it did not stop the Kamal army, they went further, and began assaulting Morrowind's mainland.

Desperate to stop the Kamal invasion, Almalexia secretly traveled back into Vvardenfell, now a Kamal-occupied territory, and went to the Red Mountain, the ancient site where the defeat of the Dwemer during the War of the First Council, took place during the First Era. In the ruins of the ancient Dwemer fortress, she found the sleeping form of the Underking, Ysmir Wulfharth, and awakened him. She summoned him to assist the Dunmer in their battle against the Kamal and their leader, the Akaviri Demon, Ada'Soom Dir-Kamal. The combined power of the Tribunal Temple, Almalexia, Vivec, a Nordic army, a group of Argonian shellbacks, the Dunmer forces and Ysmir Wulfharth, the Underking, managed to overwhelm the remaining Kamal forces, slew Ada'Soom Dir-Kamal, and drove the Kamal from Morrowind.[19][20][21]

The Dissident Priests are a sect that dispute the Tribunal's claims of achieving godhood and the temple's doctrines. As such, they are persecuted and have been driven into hiding due to the fact that they view the Ashlander prophecy of the Nerevarine as a subject that is worth learning.[22] They also believe that the temple's behavior against the Nerevarine is unjust, as said in Progress of Truth.[23] The Temple does not believe in the reincarnation of Nerevar; as such the Ordinators deal mercilessly with those that claim to be the Nerevarine and often hunt, imprison or kill them.[24]

Dagoth Ur the, seemingly, immortal enemy of the Tribunal responsible for the Blight and Corprus curse that plagued Vvardenfell for many years.[25] The fall of Ur coincided with the fall of the Tribunal gods [26]

After the disappearance of Almalexia, Sotha Sil and Vivec, the Oblivion Crisis and the Red Year, the Dunmer people went through a period of soul searching and reorganization, which made them return to the old worship of the old Daedra — Azura, Boethiah, and Mephala.[3] This new religion would be called the New Temple, and would rename the former Tribunal as saints and heroes while naming the three princes as the "True Tribunal."[27]

As House Indoril is a staunch defender of the faith and the Tribunal Temple, its Ordinators are tasked with enforcing the laws of the Tribunal.[30]

There are many temples across Vvardenfell, found in large towns and cities. These temples are often the return place of Almsivi Intervention spells,[31] and have shrines dedicated to the Temple Saints.

The Tribunal Temple is led by a patriarch. Known patriarchs are:

The military of the tribunal Temple consists of the highly trained group of soldiers called the Ordinators, who serve as guards to various Tribunal Temples, and the whole of Vivec City. There are four orders of the Ordinators: the Order of the Watch, the Order of War, the Order of the Inquisition, and the Order of Doctrine and Ordination. The Order of the Watch are guards for temples and shrines. The Order of War fights the enemies of the Temple; most War Ordinators are stationed near Red Mountain on Vvardenfell to combat and maintain the protection of the Ghostfence. The Order of Doctrine and Ordination are military scholars. The Order of the Inquisition identifies and suppresses heresy among priests and worshipers. The head Ordinator on the island of Vvardenfell is Berel Sala. All four orders obey the rules of the Alma Rula.[32] In the city of Mournhold, the High Ordinators guard the capital. High Ordinators are chosen from the strongest most skilled fighters in the Temple and are led by Fedris Hler.[33] The most strong and loyal of the High Ordinators are chosen to be the personal bodyguards of Almalexia herself. They are called the Hands of Almalexia and are bestowed weapons and armors that are imbued with divine enchantments. They are said to be the most dangerous mortal warriors in the Tamriel.[34] The Dissident Priests revealed that the Ordinators use terror tactics, abduction, torture, and secret imprisonment to dispel heresy and dissent in the temple.[23] Another military order of the temple is the Buoyant Armigers who keep the blight from spreading out of Red Mountain, to which they have had very little success at.[35] They are led by Galdal Omayn and serve Vivec exclusively.[36]

The Temple names certain people as Saints for doing great deeds. There is a large number of major and minor saints, each with their own sphere of influence:

The Temple has many books that detail the lives of the three Tribunes, books about how to worship them, children's books, and tales of the temples saints:

There are many artifacts that hold an importance to the temple. Such artifacts are: 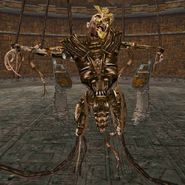 Sotha Sil
Add a photo to this gallery

Retrieved from "https://elderscrolls.fandom.com/wiki/Tribunal_Temple?oldid=3092405"
*Disclosure: Some of the links above are affiliate links, meaning, at no additional cost to you, Fandom will earn a commission if you click through and make a purchase. Community content is available under CC-BY-SA unless otherwise noted.