Trius and Shelly
Trius' Camp is an unmarked location found in The Elder Scrolls V: Skyrim.

Trius' Camp is on a small island that marks the entrance to the Pilgrim's Trench (which is underwater in the Sea of Ghosts). Directly across from it is a larger island with a Shrine of Talos on it.

Trius is waiting for his companion Shelly to arrive by ship, but neither she nor her ship ever made it to Skyrim. There's a note, For Shelly, left in case he was away when she arrived. It is assumed that he died waiting for her.

Besides the note, there are a few pots and pans, a large sack, and a usable bedroll occupied by a skeleton (presumably Trius). 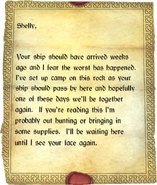 Shelly never came
Add a photo to this gallery

Retrieved from "https://elderscrolls.fandom.com/wiki/Trius%27_Camp?oldid=2736278"
*Disclosure: Some of the links above are affiliate links, meaning, at no additional cost to you, Fandom will earn a commission if you click through and make a purchase. Community content is available under CC-BY-SA unless otherwise noted.