Skeleton Champions
Dreugh
Tukushapal is a cavern in The Elder Scrolls III: Morrowind.

The cavern is located in the Azura's Coast region. Tukushapal can be entered by passing through the Marvani Ancestral Tomb. An entry platform, with stairs descending to the left and right, overlooks the area. It has been transformed into a gigantic labyrinth with very high walls. A large natural stone pillar dominates from the center of the main area, with large lava vents pouring forth steam. The floor has been paved flat with flagstones and is entirely flooded with water.

Navigating the maze leads to a tomb entryway built into the base of the central pillar. This leads to Tukushapal Sepulcher.

According to an old Nord reaver, Ennbjof, the Nerevarine can find in The Lizard's Head in Vivec City. The cavern was built to honor and act as the final resting place of Olmgerd the Outlaw. Olmerd was also the bastard son Harald Hands-Free, the High King of Skyrim during the First Era. Olmgerd was said to have been buried with his enchanted axe, Stormkiss, in his ship.[1]

The sepulcher lies within the central pillar and consist of a single large natural cavern. The ceiling vaults overhead with jagged rocks hanging down. Sitting in the middle of the water is an ancient Nord ship, the final resting place of Olmgerd. Upon the ship is a corpse with treasures surrounding it, including the unique axe Stormkiss.

Swimming down into the lake reveals three raw ebony nodes.

Standing on the entry platform, it is possible to hear the musical tones emitted by the glowing, purple crystal clusters, although none are visible. High above the entry platform is a hidden ledge with the crystals that is only accessible via Levitation, which contains a unique item – the Daedric Face of God. 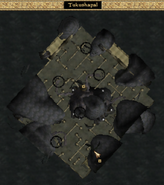 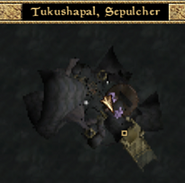 Tukushapal, Sepulcher interior map
Add a photo to this gallery

Retrieved from "https://elderscrolls.fandom.com/wiki/Tukushapal?oldid=3123776"
*Disclosure: Some of the links above are affiliate links, meaning, at no additional cost to you, Fandom will earn a commission if you click through and make a purchase. Community content is available under CC-BY-SA unless otherwise noted.