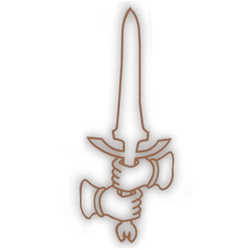 For other uses, see Two-Handed.

Two-Handed is a skill in The Elder Scrolls V: Skyrim, and is one of the six skills that falls under The Warrior play-style. Two-handed skill is raised by the use of large melee weapons that are wielded with two hands.

Comparisons with other games[]

The following books provide a permanent one-time increase to the Dragonborn's Two-Handed skill. See each book's page for a list of possible locations.

The following quests increase or help to increase the Two-Handed skill:

"The Gods gave you two hands, and you use them both for your weapon... I can respect that."
―Hold Guard[src]

This is a list of Two-Handed weapons that the Dragonborn is able to craft at a Forge given the appropriate perks.

This is a list of Two-Handed weapons that are not able to be crafted by the Dragonborn. They are either received as a quest reward or looted throughout the world. They may or may not be unique.

The following are perks that become available to select as the skill is leveled up.

Comparison to other combat styles[]

The greatest advantage of two-handed weapons over dual wielding is blocking, and particularly activating the Quick Reflexes perk in the Block skill tree, which slows down the world whenever the weapon is used for blocking a power attack, allowing for greater reactions and manoeuvrability. Blocking is impossible while dual wielding, though they may always switch to using a shield or unequipping one weapon to block with the other to take advantage of their Block skill and related perks.

The biggest disadvantage of two-handed weapons is that they do not work nearly as well with stealth combat. There are three perks in the Sneak skill tree to give one-handed weapons (especially daggers) as well as bows and crossbows significant sneak attack bonuses over even the most powerful two-handed weapons.

Deutsch Español Français Nederlands Polski Português Русский
*Disclosure: Some of the links above are affiliate links, meaning, at no additional cost to you, Fandom will earn a commission if you click through and make a purchase. Community content is available under CC-BY-SA unless otherwise noted.
Advertisement