Tyr is a Blade who accompanies the Forgotten Hero during their journey.

At one point in time, Tyr was captured and pitted against The Forgotten Hero by Reive, after which they allied and escaped from him. Tyr led the Forgotten Hero to Laaneth, Tyr's friend who was "well versed in Daedric matters." On their way, Tyr and Hero encoutered Dominion Guards who were looking for Tyr. After defeating guards, they decided to avoid the roads, instead going trough forest. When they arrived to Laaneth's home, they found out that she was kidnapped by Daedric cultists. Tyr and Hero had to use a ship to chase these cultists down, which is when they met Swims-at-Night, who decided to help them. During the sail, heroes encountered pirates. The found a crashed ship on the unnamed beach and a few dead daedric cultists. They have found Laaneth fighting off goblins in an ancient ruins. Heroes learned from her that the cult was secretly led by Lord Naarifin.

They decided to warn the emperor who was in exile in Skyrim. Tyr has led heroes through the shortest way to Skyrim. In there, they found Legate Cassia, with who they went to Imperial City, posing as Gladiators. They found a way to the White-Gold Tower, where they found the Orb of Vaermina, the device Naarafin used to track down the Imperial army. He ordered Reive to take Tyr hostage to return the Orb. Here, Tyr will either break free and destroy the Orb or get sliced by Reive. 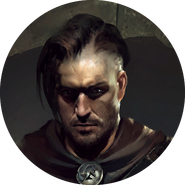 Retrieved from "https://elderscrolls.fandom.com/wiki/Tyr?oldid=2947669"
Community content is available under CC-BY-SA unless otherwise noted.