For other uses, see Tyr.

Tyr is a creature card in The Elder Scrolls: Legends.

If you find yourself in a situation where you face enemies with high defenses but low attack powers, Tyr is a good choice given that his Guard attribute and high attack power will force the enemy cards to attack and fall if they possess no means to destroy Tyr otherwise.

Tyr's Breakthrough attribute can also be used against an enemy with a low defense, and the excess attack power will be dealt to your opponent.

If Tyr is drawn through a rune being destroyed, he can be played for free as he is a Prophecy. This is suggested as his guard will delay the enemy's attacks and allow you to gain an advantage. 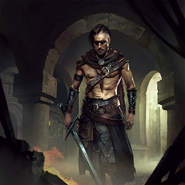 Retrieved from "https://elderscrolls.fandom.com/wiki/Tyr_(Card)?oldid=3079137"
*Disclosure: Some of the links above are affiliate links, meaning, at no additional cost to you, Fandom will earn a commission if you click through and make a purchase. Community content is available under CC-BY-SA unless otherwise noted.