The Bloodthorn Plot (part of)

Not to be confused with Unearthed.

Unearthing the Past is a quest available in The Elder Scrolls Online. This quest is one of three quests within "The Bloodthorn Plot" quest one must complete to proceed. The Bloodthorn Cult has invaded an ancient Breton graveyard and is raising zombies. The Seamount Orcs are concerned but are waiting for reinforcements.

Upon nearing Grimfield, Rozag gro-Khazun will reveal that on the king's orders, the place is off limits. He'll suggest that if the Vestige wants to kill cultists, they head to the crypt in the center. Doing so will show the ghost of Frederique.

Speaking to the ghost of Frederique Lynielle she will reveal that she was a former priestess of Arkay. If they promise to help her get rid of the Necromancers, she will give them the Staff of Arkay, which is empty after a long period of disuse. Killing the necromancers will release the dark energy that they use to raise the dead, which the staff converts into power.

Crafty Lerisa will appear at this point, and give a set of Bloodthorn Robes, a disguise that will make Bloodthorn Zombies not attack. Head to the locations where the cultists perform their rituals and disturb them so the motes of power are released. Gather six to recharge the staff of Arkay.

Speak to Frederique again and she will ask them to speak to King Renwic, who has more information.

King Renwic will reveal that the Seamount Orcs attacked generations ago and took their island. His failure to defend his people was unforgivable, but his attempt to defeat the Orcs was worse as he attempted necromancy. An ancient Ayleid relic is buried on the island and the Bloodthorn seek its power.

King Renwic then opens a portal, the Vision of the Past, that will allow the Vestige to "see his last day through the eyes of his enemies". After entering they will be Warcaller Targoth, a well-respected Orc and see through his eyes. Talking to Hunt-Wife Othikha she will tell them to stop the King who has sealed himself off deeper into the mine, preparing some foul spell that will kill all Orcs. Make the prisoner's talk, look through their belongings and if they can't be coerced to reveal any plans they must pay the blood price. Use this charm to chain their ghosts after they are executed and ask them, ask wisely as there is only one question for each.

A number of possessions such as Drago's Orders, Note to Nurese, and Crumbling Breton Scroll can be found next to the characters Drago Auberdine and Queen Nurese respectfully. Frederique will ask to stop her king, but cannot help any further. Threaten the King's daughter, by saying they will kill her mother, for a non-lethal resolution to the mission.

After interrogating the prisoners and finding out more of King Renwic's plans, summoning an undead Ayleid army, head on to talk to War Chief Yzzgol waiting by the door to the ruin interior. He is talking about victory, and that Renwic will surrender and join his people in exile. If he doesn't surrender he'll be killed.

Turn both runestones to open the door to the ruin interior where King Renwic is preparing his spell in the center of the room. Confront Renwic, who will then open a teleport back to the current time. Even his death failed his people. He tried to use the relic and Yzzdol killed him. He realized the relic's power and it demanded souls and he didn't want to pay that price but the Bloodthorn will. They will raise this undead army and kill all.

He will also tell the Vestige that the Ayleid Relic is the key, he no longer remembers its location and that they have to find the relic before they do, as the relic craves souls. He offers them the Kingsguard Hammer and some

for the souls saved this day. 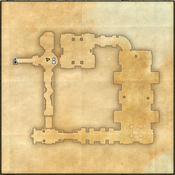