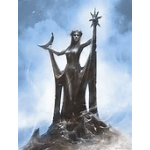 I am an Elder Scrolls fan who was first introduced to the series through Oblivion. I played Oblivion for years, searching for every glitch I could find, until Skyrim came out. Skyrim, though not quite as glitch-heavy as Oblivion, quickly became my favorite game. The graphics, unfamiliar quests, and Unrelenting Force, easily pushed Oblivion down to a humble second place.

Since then, I have played both Arena and Morrowind, (Though I've yet to finish either of them) and am happily participating on this wiki, hoping to be of use, and make references that will be understood for once. :)

Not very far in this one just yet. I only just got the first piece of the staff last time I played.

With my first and farthest character, I've gotten and cured myself of the Blight, and killed the crazed Almalexia. Sadly, I've yet to finish Bloodmoon or the main storyline.

I've beaten this game countless times, and once knew it like the back of my hand.

Also a game I have beaten repeatedly. I am currently going back through the game with a new character so that I can play the Dawnguard DLC again, becoming a vampire lord this time. Thus far, I have only just started.

Retrieved from "https://elderscrolls.fandom.com/wiki/User:Aarsedez?oldid=2852838"
*Disclosure: Some of the links above are affiliate links, meaning, at no additional cost to you, Fandom will earn a commission if you click through and make a purchase. Community content is available under CC-BY-SA unless otherwise noted.