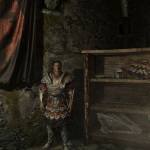 "In the caverns of lore, ugly and obscure, shines the gold of truth."
―Raelys Anine[src]

"Justice can be harsh, but it is still justice."
―Esbern[src]

"For Emperor and Empire"
―Wulf[src]

"No point in being part of history if you're too ignorant to understand it."
―Caius Cosades[src]

"... TES is a lot more like real life in that regard, there are myths, there are falsehoods, there are possibilities, and there are tales. You cannot take everything at face value, but neither should you disregard it "just because part of it has been proven wrong.""
―Myself[[src]]

"Those who hide in the shadows of the past are crushed when its structure come tumbling down."
―Septima Tharn[src]

I do know quite a lot about the lore if I may say so myself. Of the things I'm not that familiar with, I tend to be able to grasp the basics.

Without the Legion both Skyrim and Tamriel is doomed to fall to the Dominion. I have an entire list as to why the Stormcloaks are wrong, which can be found a little further down.

As an Empire supporter how could I join any other side than the Covenant, who wishes to preserve the Empire rather than destroy it?

While I'm not (yet) a MOTM on the mainspace wiki, I did become October's MOTM on the discussions, being nominated by Only1storm666.

I need to save these.

The reason I have a list of pages I created, is largely for myself. To look back on what I have contributed to the wiki. Of course, anyone is free to look at these pages and edit them if needed. Some of these pages used to be disambiguation pages, but I changed that.

Pages largely edited thanks to content I found ingameEdit

In the following "categories" I will explain why I joined the Empire, or rather, why I think the Stormcloaks are wrong.

The Stormcloaks completed the final step of the prophecy, causing Alduin's return.

When the Sons of Skyrim would spill their own blood. -Trailer

2. You being sent to the chopping block.

The Empire was searching for Stormcloaks, you just happened to be there with them at the wrong time. The soldiers at Helgen think that way too.

Damn you Stormcloaks, Skyrim was fine until you came along, Empire was nice and lazy. If they hadn't been looking for you, I could've stolen that horse and been halfway to Hammerfell. -Lokir

Stormcloaks! Get them! -Imperial Soldier

3. The civil war. Upon the murder of Torygg (yes, it was murder) the civil war (truly) started, this could have been prevented had Ulfric just asked. In reality the Civil War ‘’started’’ during the Markarth Incident, which is also to blame on Ulfric.

‘’A challenge of honor is a public declaration of a scandal against a private part.  Only nobles fight duels, and the higher the rank, the stronger the obligation. Law and custom despises dishonorable duelists. If the victim was bullied, intimidated, or goaded by a stronger party with suspect motives, magistrates often convict the stronger party of foul murder.’’ – Okan-Shei (and basically every other NPC), Morrowind

Ulfric’s challenge by itself was goading and intimidating, because Ulfric knew that if Torygg had rejected, a new Moot would’ve had to been called, or Ulfric would’ve still been able to start his civil war. Ulfric also had suspect motives, trying to usurp the throne, as the Empire puts it.

4. Families being torn apart. By starting the Civil War, the Stormcloaks and Imperials got support of famillies, these soldiers die in the war, making their families lose heart. Riften and Solitude both have one of these families, the Snow-Shods and the Morrard family. Vulwulf is often in the Bee and Barb to drink away his sadness.

‘’The Imperial Soldiers cut her down… killed her like a dog and left her body to rot in the mud.’’ -Vulwulf Snow-Shod

‘’She died out there, only having tended to the wounded soldiers for a few months. We never even found her body… the Empire burned all the dead.’’ -Nura Snow-Shod

‘’I told her. I told her the imperial army would kill her. That this was war of Jarls and Imperial Generals and we had no part in it. She just wouldn’t hear it. It was brave of you to come to me with this. I can’t thank you for it, not for this, but you have done me a service.’’ -Angeline Morrard

5 The Thalmor coming to Skyrim. The Markarth Incident was staged by the Thalmor and Ulfric, the Thalmor forcing Ulfric's arrest resulted in Ulfric becoming uncooperative to their direct contact, but it did give the Thalmor an excuse to come to Skyrim.

‘’Forsworn had taken over Markarth, and Ulfric and his men drove them out. Empire promised they'd be free to worship Talos afterwards. Pity no one told the Elves. Whole group of those Thalmor came and they demanded Ulfric's arrest.’’ -Cedran

‘’After the war, contact was established and he has proven his worth as an asset. The so-called Markarth Incident was particularly valuable from the point of view of our strategic goals in Skyrim, although it resulted in Ulfric becoming generally uncooperative to direct contact.’’ -Thalmor Dossier: Ulfric Stormcloak

‘’Then the elves found out about it. We were forced to arrest all of them.’’ -Jarl Igmund

6. A loss of men and resources for the next Great War. Thanks to the civil war, coffers of Holds are being thrown empty and people (soldiers) are being killed. It’s notable that the trading hubs and major cities are currently having light coffers, Whiterun, Riften, Windhelm and Solitude.

"Our coffers are nearly empty. I can scarcely afford to pay the guards, and we need every one of them in these troubled times. You'll have to make do with what we have, Proventus." -Jarl Balgruuf the Greater (To Proventus Avenicci)

‘’My heart goes out to them. If only our coffers were deeper, I could protect them as they were my own family.’’ -Jarl Laila Law-Giver

‘’As you know, Solitude’s coffers are much depleted by the war efforts.’’ -Jarl Elisif the Fair (To Thane Erikur)

7. Friends becoming enemies. Clan Gray-Mane and Battle-Born used to be friends, until the Civil War started, the Stormcloaks are to blame for this, since they started the war.

‘’There was love between our families. For generations. Now, there is only enmity.’’ -Bergritte Battle-Born

‘’Aye, we used to be fast friends, though it was long ago.’’ -Vignar Gray-Mane


8. Caused the Forsworn to be aggresive again.

The Forsworn were peaceful rulers when they ruled over Markarth. When the Stormcloaks came to reclaim ‘’their land’’, the Forsworn became aggresive again.

The Forsworn Kingdom was quite peaceful for those 2 years they were in power. -The Bear of Markarth

9. Cause of racism in Windhelm.

Ulfric does not only create, he also enforces racist policies.

Did you know it was Ulfrics decree that forbade us from living within the city walls? -Scouts-Many-Marshes I'm a dark elf and I live in Windhelm, so yes, I live in the Gray Quarter. You must be new around here, or you'd know they don't let my kind live outside that slum. -<Aval Atheron

Only when Nords get attacked does Ulfric send aid. This is even proven by the dead Khajiit caravan at Steamcrag Camp and Refugees' Rest being overrun by trolls, with two carts burried under the snow. (Also further proving Ulfric’s racism)

‘’Whenever a group of marauders attacks a Nord village, Ulfric is the first to sound the horn and send the men. But a group of Dark Elf refugees gets ambushed? A group of Argonians or a Khajiit caravan? No troops. No investigation. Nothing.’’ –Brunwulf Free-Winter

11. Only care about themselves. Jarl Laila says when you first enter Riften that if a Dragon were to attack the city, and Riften falls, she should be saved instead of her people.

‘’If Riften should fall, it’s only right that its leader be spared.’’ -Jarl Laila Law-Giver

12. Discrimination against magic users. Korir shows clear disdain towards the College and, when the Imperials take over Winterhold, he wishes that the population of Winterhold freezes to death.

‘’It wasn’t enough that the College still stands, now the damnable Empire has Winterhold. I hope they all freeze to death.’’ -Jarl Korir

‘’Look around you. Winterhold is in this state because of those damned mages.’’ -Jarl Korir

‘’What’s there to tell? It’s mostly gone now, thanks to those damned mages in the College.’’ -Jarl Korir, about Winterhold

13. A fool as Jarl. Skald the Elder claims the Empire is to blame for the Dragons returning, and that if the Stormcloaks get rid of the Empire, the Dragons will leave. Needless to say, his claim is wrong, since Alduin needs to be slain for the Dragons to leave.

‘’As soon as we drive the Empire out of Skyrim, the dragons will vanish.’’ -Jarl Skald the Elder

14. Assassination attempt on a neutral Jarl.

The Stormcloaks try to assassinate Jarl Balgruuf, who is neutral in the Civil War, neither Imperial, nor Stormcloak. In Ulfric’s ‘’If you’re not with me, you’re against me’’ head, Balgruuf would be an enemy.

Take your pick. Dragons, Stormcloak assassins, ambitious and unscrupulous nobles... Sometimes I think his own children want him dead. And those are just the physical threats. Assaults on his sanity are another matter entirely. Every day, he deals with obsequious functionaries and incompetent bureaucrats. Sadly, I'm not allowed to eliminate them. Well, not yet, anyways.﻿ -Irileth

And if you think that Irileth lies about the Stormcloak assassins, she has taken down many would-be assassins.

...more than one would be assassin has met his end at the tip of my blade. -Irileth

Not to forget, there’s an ingame ID for a Stormcloak soldier in Whiterun Guard armor, which would be the perfect disguise for an assassin. (ID: 000E962C)

Possibly the best reason not to side with the Stormcloaks is that Ulfric regrets the rebellion. In fact, he even says it’s the fate of the rebellion to lose.

‘’Skyrim was betrayed, the blood of her sons spilled in doomed struggle against fate. And so in death, too late, I learn the truth – fed by war, so waxed the power of Alduin, World-Eater – wisdom now useless. By gods’ jest in this grim mist together snared, Stormcloak and Imperial, we wander hopeless, waiting for succor.’’ -Ulfric Stormcloak

If you want to know some lore on the Orcs that this wiki doesn't accept, feel free to continue.

Retrieved from "https://elderscrolls.fandom.com/wiki/User:Blademaster_Jauffre?oldid=3069538"
*Disclosure: Some of the links above are affiliate links, meaning, at no additional cost to you, Fandom will earn a commission if you click through and make a purchase. Community content is available under CC-BY-SA unless otherwise noted.