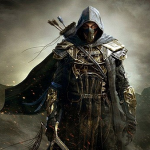 I started with Skyrim, but have played Morrowind and Oblivion. I also play Elder Scrolls Online, and have been an editor for the Wiki since August 2015. I was voted MOTM for October 2015 and became patroller in January 2016.

For those who care, you'll find me as Vinuin (@Bronkiin), a Bosmer Nightblade, on Elder Scrolls Online. Here is a gratuitously dramatic screenshot:

Retrieved from "https://elderscrolls.fandom.com/wiki/User:Bronkiin?oldid=2981546"
*Disclosure: Some of the links above are affiliate links, meaning, at no additional cost to you, Fandom will earn a commission if you click through and make a purchase. Community content is available under CC-BY-SA unless otherwise noted.