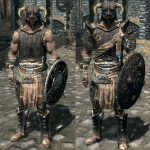 aka Don and Oliver

We are a father/son team. We both play Elder Scrolls games. Some Morrowind, but mostly Oblivion and now Skyrim.

The father portion of this team plays pc now that his son has shown him the magic of modding skyrim, but prefers to do so with a console controller. The son portion of the team has converted from a console gamer to a full on pc gamer. Darth plays The Elder Scrolls, Fallout, and some Civilization V. Orc plays League of Legends and has been playing it for several years, he is a noob at StarCraft II and is trying his best to learn. Orc also enjoys playing nearly any singleplayer bethesda game.

We first started editing Wiki's a little over two years ago, on the Nukapedia wikia, and we are still in the process of learning. Friendly advice is always appreciated.

As for our name, we started using DarthOrc over a year before we ever joined this wiki. Darth refers to the dad, who has been using it for years, and O.R.C. are the son's initials.

Retrieved from "https://elderscrolls.fandom.com/wiki/User:DarthOrc?oldid=2517727"
*Disclosure: Some of the links above are affiliate links, meaning, at no additional cost to you, Fandom will earn a commission if you click through and make a purchase. Community content is available under CC-BY-SA unless otherwise noted.