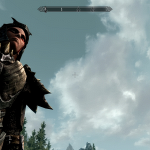 Deadpool of the Wastes

I've been gaming on-and-off since 1983, when my sixth birthday present was a ZX Spectrum. I then relied on friends' Amigas etc until I bought a PlayStation and stumbled across the original Medal of Honor in the Sheffield Crookes branch of Blockbuster, circa Christmas 1999. I've owned most consoles at some point, but around 2008 I was shown the difference in visuals between a game played on 360, and the same game played on a high-spec gaming rig. I had a £1500 rig built, and when I discovered that I could use a 360 controller with it, I've never looked back.

My favourite genre in fiction (not confined to gaming) is post-apocalyptia. My favourite games to date have been the Resident Evil series, the first Far Cry, the Medal of Honor/Call of Duty series (up to MW, by which time I'd grown out of shooters), Worms, Fallout 3/NV.

Skyrim isn't the first fantasy game I've played - I spent many hours on Hexen 1 & 2, whih I now realise bear many similarities to The Elder Scrolls series.

I contribute both here and to the Fallout Wiki. All that's missing on this site is a Fallout Answers-style page.

I'm currently on my third play-through of Skyrim (the first was aborted due to the 360 just not being up to the job, and the second due to PC bugs that were largely my fault), although I'm giving less time to it as I wish to add mods, and I realise that it could take months for those produced on Steam Workshop to be tested, patched, tweaked and perfected. That said, I've found that simply being able to craft arrows has made a big difference to gameplay.

My Dragonborn is a female Nord. I chose Nord because the Battle Cry ability allows my character a 'break' mid-combat, to cast a healing spell.

I realise that some players put a great deal of thought into naming their Dragonborn, giving them a back-story etc etc...I'm just not that into it!

Questions About Skyrim That Even M'Aiq Can't Answer: can you?Edit

I'm sure that other questions will occur to me. If you can answer any of the above, please let me know. I'll be impressed.

Retrieved from "https://elderscrolls.fandom.com/wiki/User:Deadpool_of_the_Wastes?oldid=532515"
*Disclosure: Some of the links above are affiliate links, meaning, at no additional cost to you, Fandom will earn a commission if you click through and make a purchase. Community content is available under CC-BY-SA unless otherwise noted.