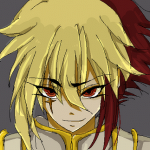 I'm FaceOfJanus and I'm a user on this Wiki~! :D

Most of the games I've played are the more recent ones, so I don't have much notable information to add (since everyone else beat me to it! xD); I mostly make small edits and fixes, and I do a lot of copy-editing. In time though, I hope to able to have my own go at Morrowind, since I've only heard great things about it!

I try to make it a habit of editing everyday, because I know this Wiki could use a lot of work, and I'm always happy to help.

I like to edit because it gives me practice writing. I've started out making small changes, and I hope to eventually be able to write articles effectively. While it takes time, I still have high hopes. ^_^

The title Word Nut describes me. I wuv words less-than-three.

Because these aren't really worthy of being article-content, I thought I'd share my observations here. They may or may not be exact, but they're ideas and are pretty dang close (if I do say so myself ^_^).

I'm not sure if it would be grammatically correct to write søvngård without inflection (as I do not speak Danish), but it would keep with a pattern in Germanic languages in adjective usage.

Bruma — From Latin bruma (Winter Solstice; or, by extension, Winter weather), which would refer to the city's snowy location in Cyrodiil. Cognates include the Modern English brumal (cold or wintry) and the shared French brume (mist or fog).

Almalexia — Possibly from Latin alma (Kind, nourishing) as in alma mater (nourishing mother) and Latin lex (law). The -ia could be simply a feminine suffix for her name, or more likely the feminine suffix of -ius (related to, pertaining to).

If put together, her name could ultimately mean "Of the Kind Law" or "Of the Nourishing Law" with a feminine suffix.

Because she's known as Mother Morrowind (for Alma) and is the warrior of the Tribunal (Lex, she would enforce the law), I'd push towards this.

Cheydinhal — This is flimsy. I cannot source this one because I've forgotten the article from which I found this. In a letter article—I believe from Oblivion—a character referred to the city as the Shaden Hall. This could be the original etymology, or perhaps a mistaken etymology or eggcorn by the character in question. The former might make sense due to the city's architecture, but this could also further contribute to the idea of the latter.

Dremora — Akin to bases of dream and mare (as in nightmare), with mare referring to an evil spirit. When forming a compound-noun from Old English principles in Modern English, we sometimes shorten the sounds (e.g. Shepherd = Sheep + Herd [which meant a herdsman, but also the modern sense]).

I've always assumed this theory because Dremora are, in a sense, real nightmares, as is Oblivion. Words are named by people, and if dremora was invented by Tamriel's mortals, then it would make sense to first perceive these Daedra as nightmares. I always back this by this interview from the Imperial Library concerning the usage of Daedroth. Check it out.

Sithis — Possibly from the Old English for scythe. (The c in the modern word is a mistaken relation to the Latin root scindere [the root for scissors], thus the more appropriate word would be sythe or sithe.)

Because mortals view Sithis as having a corporeal form represented by a skeleton to symbolize death (even though he's the Void), the relation to scythe (the weapon used by Death) would fit well.

Welkynd Stone — Could derive from welkin (the sky, the heavens, the vault of heaven), as according to Magic from the Sky these stones are shards of meteoric glass which fell from Aetherius (the afterlife).

Coincidentally welkin is one of my favourite words :D

Ogrim — Likely based on the word ogre due to their ogre-like appearance. Could also be a portmanteau of ogre + grim.

Skeever — Likely from the verb to skeeve (to disgust) from Italian schifo (disgust, nausea) + the agent suffix -er, altogether meaning "one who disgusts."

Retrieved from "https://elderscrolls.fandom.com/wiki/User:FaceOfJanus?oldid=2852938"
*Disclosure: Some of the links above are affiliate links, meaning, at no additional cost to you, Fandom will earn a commission if you click through and make a purchase. Community content is available under CC-BY-SA unless otherwise noted.