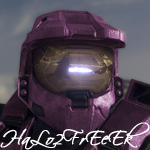 I'm HaLo2FrEeEk and I WILL KILL YOU IN THE THROAT! I've been an avid Elder Scrollian for years. I started with Oblivion (and as such never really was able to get into Morrowind). I bought Oblivion with my first paycheck from my first job in March of 2007...I think I played that game every day for a year, and didn't trade it in until December of 2011 (I traded it toward Halo CE Anniversary). Until recently, I worked at Gamestop, but I was just a seasonal and their payroll slots got cut dramatically so I had to be let go, I hope to be hired back before summer though.

Anywho, I got Skyrim mid-December during Gamestop's Employee Appreciation weekend (25% off instead of the usual 15%). I bought it for the 360, then learned that, since I worked at Gamestop, I was able to get a free Steam copy from Bethesda, so I have it for both the 360 and PC, which is nice. Skyrim is by far one of the best games I've ever played, and I don't throw that out lightly.

I'm also, in case you didn't notice, a big Halo fan. My first Gamertag was HaLo2FrEek (two e's) on the original Xbox, but something went wrong during the transfer process when I got my 360, so I had to make a new one. I've gone by HaLo2FrEeEk ever since. I run two websites, both about Halo. One is called Infectionist Machinima (ironic because we've made one [crappy] machinima since April 2006 when we started up), it's more or less a fan/clan site, although it's pretty much dead at this point. The other gets more activity, it's called the Halo: Reach Challenge Initiative, or HRCI. If you play Halo (online) you'll know that there are daily and weekly challenges, HRCI is designed to let the community share tips and tricks about how to complete the challenges most efficiently. It's linked through Twitter, so all you need to sign up is a Twitter account (and the login is done through Twitter as well). If you'd like to check em out, here are links:

Anywho, that's about all there is to tell, I can't imagine anyone would want to know anything else about me :P

Retrieved from "https://elderscrolls.fandom.com/wiki/User:HaLo2FrEeEk?oldid=1847756"
*Disclosure: Some of the links above are affiliate links, meaning, at no additional cost to you, Fandom will earn a commission if you click through and make a purchase. Community content is available under CC-BY-SA unless otherwise noted.