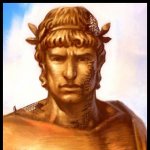 This template was placed here to prevent the user's user page from clogging up Wanted Pages and/or to remove redlinks from talk pages and forums. If you are the user, please feel free to let the public know a little more about you, then remove this template from your user page. My bioEdit

I was born o... oh forget it, I'm just going to talk about ELDER SCROLLS and my history of playing it. People probably won't care or read this... but oh well.

I first started playing Elder Scrolls in 2012... by accident. Around that time I had a little bit of extra money, and I wanted a good RPG to play. I had heard of the Elder Scrolls from my friends, so I went down to GAME and bought it. Looking at the case, I thought: 'Probably another waste of time and money' but when I played it, I was SHELLSHOCKED and ever since I have been addicted to this game. I have invested 1000+ hours into skyrim, and I have a PS3... yes, people, it IS possible. Then I HAD to get the other four, this is my rating from best(top) to worst(bottom)(Most people disagree with my rating BTW):

Skyrim(Do I need to say anything?)

Oblivion(Much like skyrim, but alot more simple and 'cartoony')

Morrowind(This game was boring and confusing)

In Arena, my character was a Nord knight known as Erik Blood-Shield. In daggerfall, it was a Wood Elf known as Maldolir who was a mage. In morrowind, I was an Imperial known as Rehsinav Cato who was a thief who was raised in Leyawiin. In oblivion, I was a high elf named Tsooncano. In skyrim I was a Breton known as Denzil Jak.

Oh and there really needs to be an emporer called Jericho, Medatron and Barthalomaus. jus sayin

Retrieved from "https://elderscrolls.fandom.com/wiki/User:HeliosHair_UK?oldid=1688926"
*Disclosure: Some of the links above are affiliate links, meaning, at no additional cost to you, Fandom will earn a commission if you click through and make a purchase. Community content is available under CC-BY-SA unless otherwise noted.