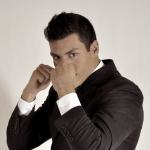 I started playing The Elder Scrolls very recently with Skyrim. And it was a while after the game was released, about june of 2012. Nowadays, I'm still playing with that same character.

When I saw a let's play just to convince me of buying it, I became amazed with the landscapes, the people, the lore...  just everything! When I first saw the Imperial Captain wearing that heavily roman influenced armor at Helgen,  I said I MUST wear that!

At first I was to be a Nord , named Orlok (yep hehe). I tried three times to get his face right but even it was for the hairstyle of the actual face that ended up looking like a doll that made me want to start from scratch (I didn't know about Galathil, the face sculptor in the Ragged Flagon in Riften.). Also in the process, I realized I wanted to be an Imperial both by race and allegiance.

So I remade my character as an Imperial warrior named just Titus (without knowing the Emperor himself was called like that).  He was more muscular (too bulky for my taste, almost looking like Dominic Purcell haha). Titus lived in Proudspire Manor and was an Imperial Officer, with him I learned about every essential aspect in the game, including skill trees, quests, locations, active effects, followers, etc. Also the fact that I was called somehow like the Emperor disgusted me, and starting the Thieves Guild questline very late made me see the potential bonuses for an early character. Also I wanted to prevent the most possible if not every bug concerning quests and other things that happened to me.

I wanted to play on Master, but I knew the magic attacks are devastating, so I wanted to compensate this by being remade into a Breton (It was still human, so he could look the same). Titus II came to existance. He started with the Thieves Guild, and was more resilient against magic. But still I didn't like the particular shadow near the eyes of the bretons, also the fact that I was no longer an Imperial and the guards reminding me "What is it, BRETON?", I kind of liked when they said Imperial. And then I realized that with proper enchantments I can mitigate this magic weaknesses. So the short-lived Titus II came to an end.

That was the moment Marcus Aurelius was born (yep, cool name from real world). The definitive Imperial Soldier. I had planned every aspect of his personal timeline. First beginning to work for the Thieves Guild and the Dark Brotherhood , then making a redemption path by joining The Companions, The Dawnguard,  The Blades , and finally The Imperial Legion , the greatest honor. Even I planned a different armor set for each rank I won during the Civil War questline. Also by that time, Heartfire came in, so I built Lakeview Manor very early in the game.

First Day in Skyrim (The Story of Orlok the Nord)Edit

After exiting Helgen, I took off and started my quest to get that armor and to be formally an imperial soldier. Solitude was the way. On the way I found myself across Labyrinthian where I saw the frost trolls for the first time. Just by looking at them from afar, I realized I wasn't going to b e able to face them, so I decided to go around the ruins on top of the nearby mountain. Then I came by Morthal where I met the man who would become my long-life companion, Benor. I brwaled him and then I befriended him. But left him there not knowing he could be my follower.

After recieving my precious Imperial Armor by Beirand, I took off to the College of Winterhold.  I don't remember where I took that quest. I remember getting my first Dwarven Warhammer from the Wreck of the Icerunner (I think). That was the most powerful weapon yet encountered, so I used it to face the stongest foes, not having any knowledge of the separate skill tree governing that weapon.

Then I continued walking all the way to the High Gate Ruins where I met Anska. She did all the job in the dungeon with her really powerful lightning spells. When we reached the room where Vokun was, I didn't know what to do. He was a very powerful and strange mummy so I left Anska to do the job, but she was cut short by the dragon priest. I then decided to run, but he chased me! I ran as as fast as I could and got out of there. Wow, such an exciting encounter!

Then I kept my course to the college and found myself outside of Alftand, where an ice mage was battling a fire mage. The fire one won and fought me. I barely survived. Note that I was level 11 without any perk. I was storing them because I wasn't familiar with skill trees. I also was overencumbered because I was carrying every type of weapon I found... (one sword, one axe, one mace, my warhammer, and a bow)

As I adventured into the dwarven ruins,  everything became really mysterious, finding the khajit brothers , then the journals and going deeper into the ruins. I was amazed by the architecture, all the stuff left behind by that ancient culture with somehow more advanced technology. I was picking up every dwarven metal and every cup, plate, bowl, just... everything! When I first met the Dwarven Spheres, I switched my heavy armor to a Leather Armor of Conjuring (I think). I knew it was enchanted, not knowing the actual effects of it. (but somewhat it had to make me stronger! Right?) Also I didn't know that it was light armor, yet another separate skill tree... such a disaster.

I barely had healing potions remaining, and the ruins just went deeper and deeper when I got to meet the Falmer. Oh my god! They didn't seem too tough, but quickly demonstrated to be able to do a lot of damage. I managed to kill the first three found there, but when I got into the torture rooms, I was convinced that I wouldn't be able to fight all of them, so I ran again! Fortunately I saw the elevator nearby of where Valie was, and escaped. I had falmer weapons and a lot of dwarven scrap. Nice memories of Alftand, such a dangerous place.

After exiting the ruins, I found the three imperial soldiers, wearing those imperial armors, so I went to salute my comrades. They told me they were doing imperial bussiness so I responded I was part of the imperial army too. They turned hostile but I managed to defeat them. This was the moment I finally got to have the so desired Imperial officer's helmet. My armor was complete.

Then I arrived to the College of Wintherhold without any major events. When I was led to my room, I was happy I finally had a place to stay and to store everything I was carrying. I did some of my first research here in the wiki and found out that the wardrobes were storage safe. After I put everything in place. I went to sleep, both in-game and in real life. It was a really long day...

The Collector (The Story of Marcus Aurelius, Legate of the Imperial Legion)Edit

He lives in Lakeview Manor with his wife Camilla Valerius and their son Blaise. Adelaisa Vendicci serves as the manor's steward. Benor is Marcus' long-time friend and has been seen accompanying him to his adventures. A powerful two-handed warrior, he carries the Champion's Cudgel to battle. Two Imperial Bodyguards are also watching Marcus' back. A tall female archer and a berserk weilding an ebony mace paired with a powerful enchanted forsworn axe. Also Sulla Trebatius,  a guest in the manor, ocasionally comes along the party.

Borkul is an orc Barbarian that travels by foot everywhere around Skyrim (no fast travels). He had a hard time after exiting Helgen dealing with bandits and trolls found in the wilderness of Skyrim. Shortly after, while passing through Riverwood, Borkul was contacted by the fellow orc Durak to join the Dawnguard. Looking for the greatest challenge he headed straight to Fort Dawnguard. In the way he found a Glass Hammer, a very rare weapon (for the actual level of the character that was 22 at that time). As he arrived Fort Dawnguard, he seeked to recruit Durak to accompany him in his travels. But first he had to proof himself.

Retrieved from "https://elderscrolls.fandom.com/wiki/User:MaNu03847?oldid=2427909"
*Disclosure: Some of the links above are affiliate links, meaning, at no additional cost to you, Fandom will earn a commission if you click through and make a purchase. Community content is available under CC-BY-SA unless otherwise noted.