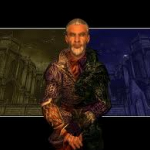 I AM SHEOGORATH.... hi im a big elder scrolls fan who has played all of them except redguard and some of the travels but i read up on them.

i do like the kinect shouts but a bit hard to do with my lisp and I only dislike one race which isn't even that much who are the bosmer (Wood elf.) Oblivion is still one of my faviourate games even after 6 years of playing it and morrowind but not as much because i've played 10 years of that.

When i thought i knew all about the elder scrolls seris i found this wikia and realised i didn't know everything ( but nearly jk) and was amazed about how much i missed out which was 600 pages or so when i first went on this.

At the moment i am writing a seris of fictional books, don't have a title yet but think i may of finished first two chapters and prolouge just need to find my notepad

"'Wonderful! Time for a celebration... Cheese for everyone! Wait, scratch that. Cheese for no one. That can be just as much of a celebration, if you don't like cheese, true? You've run a maze like a good little rat. But no cheese for you yet. Well, maybe a little."

Retrieved from "https://elderscrolls.fandom.com/wiki/User:Madgod21?oldid=672923"
Community content is available under CC-BY-SA unless otherwise noted.