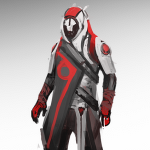 --Me in my old save using my Daedric Mace.

KernelFodder (KF for short) is a user originating from the Plants vs. Zombies Wiki, and I help out here when nothing is going on there, or when the Infernal community gets me mad!

My Elder Scrolls? For one thing, I have PS3 Skyrim with all DLCs. My current save on it (Swoosh the Vampire) uses Chillrend improved to 180 damage and Glass Bow with 43 points Chaos Damage. The Deathbrand Armor set is one of the best Armor sets out, with a base better than Daedric, with powerful enchantments, along with MUCH less weight. Who knew the strongest armor set would be a Light armor? Not me.

On the PC, I have two saves. Banditsbane, basically a level 54 Redgaurd spellsword with the ultimate armor and weapons.  He has a 531 Damage Sword of Annihalation, 379 damage Crossbane, and Zeus Armor pumped up to the max. I also created a level 5 High Elf mage named Beatrice (I was not very original, I know), but the best she has is a Lightning Bolt and Novice mage gear. I use mods that are not game-breaking or non lore-friendly, namely Falskaar, Heavy Armory, and to a somewhat mixed extent, Interesting NPCs. I also like optimization mods (SMIM, WATER, HD herbs) and bugfixing mods.

While I mod, I do NOT create mods. Here are ideas for anyone who wants to see what they can do.

If you make one of these mods, let me know. I'll gladly pay thank you!

These are useful potions to make large amounts of and actually USE, as in Consume.

All potions and poisons are discovered by ME, and you are free to use them as you see fit.

Retrieved from "https://elderscrolls.fandom.com/wiki/User:MignightHawk?oldid=1772287"
*Disclosure: Some of the links above are affiliate links, meaning, at no additional cost to you, Fandom will earn a commission if you click through and make a purchase. Community content is available under CC-BY-SA unless otherwise noted.