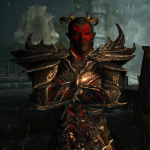 Oh, lets see about myself.... hmm... I guess you could call me a mountain goat in the game, if its possible I find ways up and over mountains. Poor, poor, Lydia.. she has to run around most of them just to keep up!

Things I found funny in Skyrim

Retrieved from "https://elderscrolls.fandom.com/wiki/User:Neguy71inok?oldid=2430389"
*Disclosure: Some of the links above are affiliate links, meaning, at no additional cost to you, Fandom will earn a commission if you click through and make a purchase. Community content is available under CC-BY-SA unless otherwise noted.