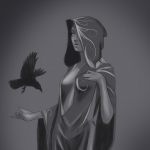 I'm like.. The coolest Daedra around. I'm not even gonna lie. c:

My real name is Rachel. I'm from a large city in North Carolina, but I aspire to sometime live in California. That's where I used to live anyway. I'm into a wide variety of nerdy related stuff such as The Elder Scrolls, MK, Creepypastas and so on. I tend to overuse emotes such as "c:" and ".-." and you're just gonna have to deal with it.

I'm usually online a few times a week. And literally have nothing better to do between college and parties other than go into wiki chat rooms. Literally, nothing.

I'm also a large fan of Metal and and Metalcore. I like the Black Veil Brides, Grim Reaper, Iron Maiden, SWS, and so on. But I still have a soft spot for Dubstep and Nightcore. c:

Thanks for wasting your time reading this! c:

Retrieved from "https://elderscrolls.fandom.com/wiki/User:Nocturnal_the_Night_Mistress?oldid=1459924"
*Disclosure: Some of the links above are affiliate links, meaning, at no additional cost to you, Fandom will earn a commission if you click through and make a purchase. Community content is available under CC-BY-SA unless otherwise noted.